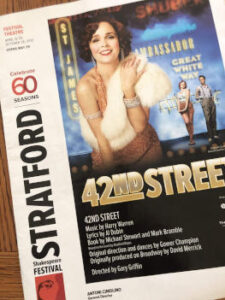 Perhaps the highlight of the “naughty, bawdy, gaudy, sporty” revival of 42ndStreet at the Stratford Shakespeare Festival’s Festival Theatre is the first appearance of beloved leading lady Cynthia Dale since Des McAnuff took over as artistic director. (Cue the conspiracy theorists.)

In fact, Ms. Dale has the secondary role of Dorothy Brock, the fading diva who will, it is hoped, make “Pretty Lady”, the musical within a musical, a huge hit and replenish the coffers of director Julian Marsh who was all but wiped out in the Crash of ‘29. Still, as so often happens in the theatre, sentiment triumphs and Ms. Dale is given the star’s curtain call, as much for her reputation as for her accomplished supporting performance.

The real story of the show revolves around the aforementioned director and Peggy Sawyer, a super-talented kid from the sticks who is making her Broadway debut in a chorus filled with impecunious show biz types hungry for a hit.

Based on the 1933 film of the same name that made a star of Ruby Keeler, the plot of 42nd Street has become such a cliché that you probably don’t need to be told that young Ms. Sawyer is plucked from the chorus to take over the lead when Brock breaks her ankle. The rest, as they say, is show biz history.

Despite the efforts of book writers Michael Stewart and Mark Bramble, who have added more Harry Warren/Al Dubin songs to the mix (the original film only had five), the resulting adaptation can’t really be said to improve on the celluloid original. Indeed, many question the need for a stage version in the first place. There probably isn’t one. Well, except for the fact that, in the right hands, it can be a lot of fun.

The Festival’s production, under the steady hand of Gary Griffin, who also helmed the hit West Side Story of a few seasons ago, has the good sense not to condescend to the material. He has guided his fine cast to find the psychological truth in the stock characters and to play it straight. It works beautifully.

Jennifer Rider-Shaw brings terrific tap technique and a Mermanesque belt, not to mention a set of pearly whites that dazzle, to the role of Peggy Sawyer. Sean Arbuckle is suitably intense as director Marsh and Kyle Blair is winning as the show’s juvenile, Billy Lawlor.

Alex Sanchez’ tapalicious choreography gives just the right nod and wink to the Busby Berkeley originals from the film and the cast, most of whom have long lists of Shakespeare credits, hoof it like pros. Sanchez has also created a memorable “Shuffle Off to Buffalo” number for Gabrielle Jones and Carl Danielson, who play “Pretty Lady’s” composer and librettist, and who make the most of the opportunity. Debra Hanson has contributed some deliciously glitzy costumes along with an inventive set.

42nd Street is somewhat unusual among musicals in that there is no strong love story. Yes, Julian Marsh seems to break out of his shell just long enough to get a little sweet on Peggy, Dorothy Brock reunites with her old flame, a vaudevillian who seems to have slipped off the stairway to stardom, and at play’s end it seems likely that Peggy and Billy will become an item, but these are throwaways. The real love story here, for both the cast and the audience is show business in all its clichéd glory. The affection is mutual.

42nd Street continues at the Festival Theatre though October 29, 2012