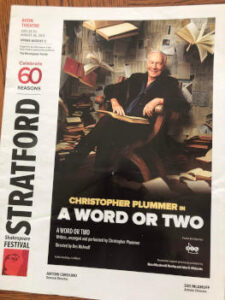 A Word Or Two

By his own admission, Christopher Plummer was quite the heartbreaker in his youth. Today, just shy of his 83rd birthday, he’s still at it. In A Word Or Two, at the Stratford Shakespeare Festival’s Avon Theatre he is sweeping audiences off their feet and leaving them begging for more as he strolls jauntily into the night.

A Word Or Two is a one-man show that Plummer has been doing for some time in aid of various fundraisers and charity events. I never saw any of its earlier incarnations but it seems safe to say that under the gentle guidance of director Des McAnuff it has reached its ideal form.

The premise of A Word or Two is simplicity itself. Plummer tells us of his early infatuation, as an only child, with poetry and words, words, words. “Words were to become my master, and I their humble slave,” he informs us and then adds with a twinkle, “Well, not so humble.”

Lord knows, Plummer has little to be humble about. As he takes us on the journey of his life, he not so incidentally presents a master class in the actor’s art. He can be gleefully hammy and heart rending, often within a matter of seconds. He moves carefully now and he husbands his energy cannily, but he is still every inch the leading man. And when the moment calls for it, he can still ascend the highest heaven of invention and hold us spellbound with the power of his voice.

The tale Plummer unwinds is less autobiographical than thematic, so the story of his life becomes the story of our life, of everyone’s life and therein lies the secret that makes the show so appealing. Much of the story is told in the words of the poets and playwrights for whom Plummer holds special affection and those words range from the ridiculous to the sublime.

He deftly reminds us of the follies of youth with doggerel like:

One evening last October, when I was far from sober
And dragging home a load with manly pride
My feet began to stutter and I fell down in the gutter
And a pig came up and parked right by my side
As I lay there in the gutter, thinking thoughts I cannot utter
A lady passing by was heard to say
“You can tell a man who boozes by the company he chooses”
And the pig got up and slowly walked away

He deftly defines middle age as that time when men stop combing their hair and start arranging it. And when, as inevitably it must, the specter of death approaches Plummer brings tears to our eyes without the slightest hint of sentimentality.

This brief gloss cannot do justice to the depths of feeling the piece evokes. Far more than the story of one man’s life, A Word Or Two teaches us what it is to be human and puts us in touch with the ineffable tragedy of the “brief candle” that is life. Though Plummer disavows any religiosity, the effect is almost sacramental. After all, like religion, theatre is one of the ways we human beings attempt to make sense of the world.

Standing ovations have become unearned clichés these days, at the Festival and elsewhere, but the rapturous standing ovation this show received was entirely appropriate. One can only hope Plummer will take his show on the road so more people can savor this very special treat.

In an interview on the occasion of the Stratford Shakespeare Festival’s 50th anniversary, the late William Hutt, one of the Festival’s great stars, noted, “the age of the great stage actor is almost over.” At the Avon Theatre we can still bask in the warm glow of the sunset of that golden age.

A Word Or Two continues at the Avon Theatre though August 26, 2012