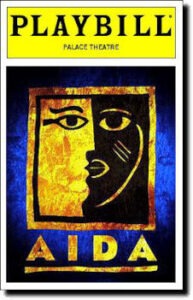 I never thought I’d ever want to hear “Goodbye England’s Rose” again, but half way through Aida I started longing for the good old days when its glitter-clad composer was pounding the ivories at Westminster Abbey and crooning “Candle In The Wind.”

Aida, for those who’ve been exploring the Upper Nile for the past year and have thus been out of range of the gossip rags, is the Disney-backed Elton John–Tim Rice reworking of either Giuseppi Verdi‘s 1871 opera of the same name or, if you believe the publicity machine of Hyperion Theatricals (the producers), an ancient Egyptian “legend.” (Actually, the program has the decency to say the piece is “suggested by the opera.”)

The current version (the book is credited to a committee composed of Linda Woolverton, David Henry Hwang and the show’s director, Robert Falls) tells the tale of the star-crossed love between the Egyptian general Radames, who is busily engaged in subjugating neighboring Nubia, and Aida, a Nubian slave girl who is actually, and unbeknownst to him, the Nubian Princess. Unfortunately, Radames is betrothed to Amneris, the daughter of Pharoah who is being slowly poisoned by Radames’ father. And you thought you had problems!

At its best, Aida is so deliriously ghastly it is great fun to watch. At its worst it is embarrassing. Much of the time it is merely boring. Mr. John, who can write a catchy tune now and then, has risen to his level of incompetence to produce a sort of Mc-rock score and Mr. Rice follows suit with gratingly banal lyrics — although it must be said in his defense that Mr. John’s truncated musical lines didn’t give him much to work with. The book often manages bathos when it strives for drama and its humor is on a par with the best of today’s sitcoms (which is to say it’s pretty dreadful).

In the service of this unpromising material, Mr. Falls has served up a zestfully over-the-top production that produces enough striking stage pictures and bizarro scenic effects to keep interest alive. From time to time, and against considerable odds, it manages to produce something akin to real emotion. Bob Crowley‘s sets are simple, inventive, and largely terrific and in some scenes Natasha Katz‘ lighting stands in for sets to stunning effect. Crowley also did the costumes which are occasionally spectacular, but why he chose to put the Egyptians in that vaguely Persian formal wear is beyond me.

Only the choreography is consistently lacking. It’s the sort of generic MTV video non-dancing that some caring choreographer might create so as not to overtax the talents of Janet Jackson. A few times, it draws on African dance forms in a way that is both ineffective and patronizing. On top of that, and an unforgiveable sin on Broadway, it is sloppily executed. Ironically the choreographer, Wayne Cilento, was in the original company of A Chorus Line. He should know and at $80 bucks a seat we deserve better.

Fortunately, the show’s two leading ladies turn in performances of such stellar assurance that I tended to forgive and forget how much was lacking elsewhere. Heather Headley is a commanding Aida with a powerful voice and affecting manner who manages to create gold from the purest dross. Even better, for my money, is Sherie Rene Scott as Amneris, who starts out as a sort of dingbat Jewish-American princess from Jersey and grows into something of a compassionate conservative as the heir presumptive to the throne of Egypt. The men are less successful. Adam Pascal is a likeable but rather bland Radames and John Hickok, as Zoser, Radames’ father, gives a game performance in a ludicrous role. It doesn’t help that he seems to have sired Radames when he was two.

Since I fear I am giving the distinct impression that I did not care overly much for Aida, I hasten to add that mine was a minority opinion. The folks around me leapt to their feet to give the show a standing ovation and on the way out I heard people gushing with praise for both the show and the music (of which I can remember nary a phrase).

There is one way in which the new Aida is distinctly superior to Verdi’s shopworn version. It has a happy ending (of sorts) of which Shirley MacLaine would surely approve and which I found rather sweet, too. My guess, however, is that Aida will replace Cats as the vastly popular show at which hip New Yorkers love to sneer.