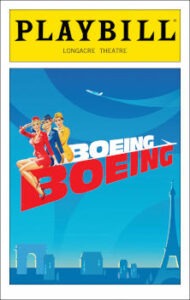 Mark Rylance, the marvelously eccentric British actor, is the eerily quiet eye of the raging hurricane that is Matthew Warchus‘ revival of the venerable French farce, Boeing, Boeing.

Rylance, making his Broadway debut, is a study in actorly technique. The shy, hestitant milquetoast he creates here is a wonderment of tics, pauses, hesitations, stammers, and schtick and a comic masterpiece. His portrayal of the play’s central figure is totally over the top, totally unbelievable and yet you buy every minute of it. He is the main, I might almost say only reason, a trip to the Longacre Theatre is warranted.

Boeing, Boeing, the most performed French play in history, gives new meaning to the phrase ménage a trois. It tells the tale of an ardent womanizer’s system for juggling three airline stewardesses in his Paris love nest and its inevitable collapse. It’s the sixties, free love is in the air, and Bernard (Bradley Whitford), a successful American architect practicing in Paris, thinks he has it all figured out.

Enter Bernard’s old school chum Robert (Rylance) from Wisconsin (this version translates the Frenchmen of the original into Yanks). Bernard, with the able assistance of his French housekeeper (played at the performance I caught by the estimable Pippa Pearthree, stepping in for Christine Baranski) is carrying on simultaneous love affairs with three stewardesses, an American, a German, and an Italian, using the airline timetables (there’s an anachronism for you!) to keep each of them from suspecting the others’ existence.

Robert is somewhat nonplussed by his old friend’s domestic arrangements but finds himself oddly attracted to the concept, even as he is drawn ever deeper into a maelstrom of unexpected arrivals and near misses as bad weather and flight cancellations send Bernard’s intricately constructed sexual house of cards reeling.

Not a bad premise for a farce and the set (a nicely minimal rendition by Rob Howell who also contributed the delicious costumes) provides the requisite number of doors for slamming shut as the plot thickens. Alas, Warchus, who did such a finely calibrated job with Art some seasons back doesn’t seem to trust his material and his performers to deliver the laughs.

Hyper-stylized treatment of French farce seems to be a peculiarly British affectation and one to which Warchus subscribes with gusto. After the relatively calm set up, he sends his characters into hyperdrive and soon has them climbing the walls — literally. There are laughs to be gained, certainly, but much is sacrificed. Like any sense of human reality.

Worst of all are the stewardesses. These are sexy women as imagined by a man who hates women. Their sensuous allure is so overstated and so cartoonish as to be vaguely repellent. The great joy of sex farce is watching real people in the throes of very real and recognizable passions fall to pieces. Making these women hateful caricatures entirely misses the point. Only Gina Gershon, as the Italian, is allowed a modicum of humanity and she makes the most of it, becoming the only one of the three I managed to care for.

Likewise, there’s little to explain Bernard’s success with women or the girls’ apparent devotion to him. Less to explain the mysterious attraction Robert exerts on the monstrous German. And nothing at all to explain why Bernard and Robert, who seems galaxies apart in temperament, are friends to begin with.

Some of the best things about the production are the most peripheral. The peppy French covers of sixties pop-songs that play before the curtain rises and during intermission are delightful. And the dance number that serves as the curtain call is great fun. It reminded me of the gavottes that closed out the “original practices” productions of Shakespeare at London’s Globe Theatre when Rylance was artistic director there.

And yet, Rylance’s superbly elaborated performance rises above it all. Even when everything about a scene seems dead wrong, Rylance remains marvelously right.