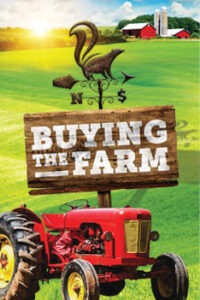 Buying The Farm At Drayton

Buying The Farm, a deceptively light-hearted comedy by husband-wife team Shelley Hoffman and Stephen Sparks is getting a crowd pleasing production at the Festival Theatre in Drayton, Ontario.

Aging bachelor farmer Magnus Bjornson (Terry Barna) is tending to business on the farm that has been in his family since his grandfather carved it out of a forested wilderness. Enter Brad Deacon (Alex Furber), a “cityot” (an idiot from the city) and novice real estate agent whose ignorance of country ways is revealed by the spiffy but comical cowboy-ish outfit he wears in an attempt to fit in. His mission is to convince Magnus to sell the farm so developers can make a killing turning it into a housing development. Magnus isn’t interested and his grand niece Esme (Kelly Van der Burg) is downright hostile – not only to the idea of selling the farm but to Brad personally.

Brad is not only absurdly inept but a wimp of the first water, horrified by the sight of blood, terrified of spiders, and roused to nausea by the odors of the farm. Esme, in contrast, is uber-capable and has been, as we learn, from a tender age when she started chopping off chicken heads to make dinner. She has fled college for reasons she will not disclose to help her grand-uncle Magnus run the farm. She seems to take great delight in tormenting Brad, mocking his weaknesses and making no effort to disguise her utter contempt for what he is doing. Oh, and by the way, she is extremely pretty and Brad is appropriately handsome.

It doesn’t take a great deal of dramaturgical insight to understand that this kind of oil-meets-water setup can only lead to one thing – true love. But Hoffman and Sparks have a great deal of fun getting us to that denouement.

Magnus may be a stubborn coot but he’s a sly old fox who knows that his grand-niece has a heart-sized hole in her life and that Brad shows potential that Esme cannot see. Barna plays this beautifully as Magnus contrives to keep Brad from leaving the farm and makes sure the two are forced to continue to interact.

As funny as Buying The Farm is, there is a serious undercurrent to it. According to the 2021 census, Ontario is losing 319 acres of farmland every day, up from 175 acres a day just five years ago. Developers and investors like the ones Brad represents are driving this trend. It is a very real problem and one that the Drayton audience knows intimately and, I suspect in the case of some audience members, personally. One of the nicest things about Buying The Farm is that the playwrights not only find a happy ending for Brad and Esme but engineer one for Magnus’s farm as well.

Buying The Farm is so attuned to the local zeitgeist that I suspected it must have originated at the Blyth Festival, which specializes in this sort of material. But no, it has been produced independently by a number of small theatre companies in southwestern and western Ontario since 2019 and has now come to Drayton in this new production. Perhaps in some future season, Blyth will decide to revive it. Lord knows the subject merits continued attention.

The Drayton production under the guidance of director Lee MacDougall is first rate. The young not-yet-lovers are perfectly cast. They seemed to be trying a bit too hard at the beginning of the performance I saw (the final—and only—preview), but they settled into the roles as the play progressed. Terry Barna is perfection as Magnus. As he demonstrated in The Birds and the Bees a few seasons back (playing another crusty farmer) he has a gift for comedy and the kind of pitch perfect timing that can turn a mild joke into a belly laugh. A bit in which he struggled to reassemble a tractor’s crankcase elicited a round of applause.

Meaghan Carpentier has contributed a lovely set that is truly impressive given the modest size of the theatre. Lyle Franklin has provided unobtrusive lighting and Nicole Del Cul’s costumes get the job done. I especially liked the way Esme gussied herself up a bit for dinner in the second act, suggesting that her icy hatred for Brad was beginning to thaw ever so slightly.

Another important contribution came from the local audience. When I saw The Drawer Boy at the Blyth Festival, I noted how the knowing laughter of the people around me helped a “cityot” like me more fully appreciate the goings on. Many of the lines in Buying The Farm would get a laugh in Toronto or New York but in Drayton there was an extra layer of recognition which made me appreciate once again how rich theatre can be when it serves its community.

Director MacDougall caps the curtain call with a fun (and quite funny thanks to Barna) country dance. The pedant in me can’t resist pointing out that ending a play with a gleeful dance is a tradition that dates back to Shakespeare’s day. Well played, Drayton!

Buying The Farm continues at the Festival Theatre, Drayton, until July 16, 2022. It then moves to cottage country and the King’s Wharf Theatre in Penetanguishene, where it runs from July 21 to August 6, 2022. More information on the Drayton run here and for the King’s Wharf run here.