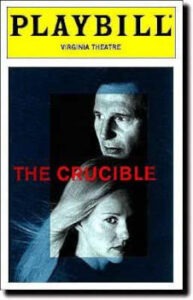 One sure hallmark of a classic is its ability to speak to succeeding generations. By that measure, Arthur Miller‘s searing parable of intolerance, vengeance, and mass hysteria, The Crucible, is destined to resonate for centuries to come. Certainly, there are moments in the play that hit today’s Broadway audience with the force of a breaking news bulletin. And this is an age in which Miller’s sobering tale needs retelling.

What’s more, Miller’s masterpiece is receiving, under the assured direction of Richard Eyre, a production that will surely define the play for our time.

Set during the Salem Witch Trials of the late 1600s and using the names of actual participants, The Crucible is universally seen as an allegory of the McCarthy era and the demand to “name names” during the anti-Communist witch hunts of the 1950s. But the moral of the story proves to be far more universal than that and Eyre’s powerful production is the most bracing evening of theater on Broadway this season.

Like many Miller plays, The Crucible revolves around a seemingly ordinary man who suffers extraordinary emotional pain and discovers unwanted depths of courage. As John Proctor, a straight-from-the-shoulder man of the soil, whose inexorable journey to the gallows takes on the dimensions of Greek tragedy, Liam Neeson turns in a performance of such subtlety and strength that he is the instant odds on favorite to win a Tony. Much of the plot of the play revolves around the gap between the simple people of the town and society writ large, in the form of a hypocritical theocracy and their petit bourgeoise sycophants. Neeson captures this divide perfectly and brilliantly. Of all the actors in the piece, he comes closest to making us believe he is a farmer wresting a living from a hard frontier existence, and it is that everyman simplicity that makes Proctor’s moral courage all the more inspiring and heartrending.

Although not ideally cast, Laura Linney brings dignity and backbone to the role of John’s wife, even as she misses some of the character’s complexities. Better still is Angela Bettis as Abigail, the scheming catalyst of the witch trial that is Proctor’s undoing. Her visage teeters between serene beauty and pure spectral malevolence; it’s a riveting performance.

Another standout contribution comes from Tim Hatley‘s massive wooden sets. Oppressive and machine-like in the manner of some enormous torture chamber device, they evoke the barrenness, isolation, and crushing weight of Salem society and provide a startling grace note to the play’s denouement.

But ultimately, the play’s the thing, as it should be. Barely 50 years after it was written, Miller’s play has assumed the lofty stature of a much older masterpiece. Its wisdom seems ancient, its scope Shakespearean. Eyre bends every element of the production to service the playwright’s vision. The result is a Crucible for our era and Broadway at its very best.

Read a review of the 2019 production of The Crucible at the Stratford Festival.