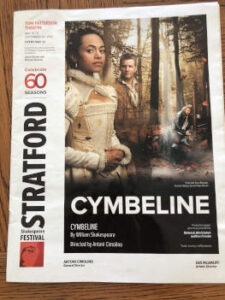 If you’ve never seen William Shakespeare’s Cymbeline there’s a good reason for that. The play is devilishly difficult to do. Start with a large, sprawling cast filled with roles that would challenge even the best actors. Then add a complex, intricate and, to modern tastes, sometimes ludicrous plot. Top it all off with some daunting stage effects (the script calls for a severed head followed closely by the torso from which it was lopped and a deus ex machine that’s a real doozy) and you begin to understand why most theatre companies and directors shy away from this “problem” play as it is sometimes labeled.

Fortunately, the Stratford Shakespeare Festival and director Antoni Cimolino are not easily cowed. Indeed it is one of the glories of the Festival that it regularly tackles plays that might give others pause and presents them straight up, no chaser, in faithful productions that are not tarted up with the kind of arty pretense that masks aesthetic uncertainty. The current production of Cymbeline is in this tradition and it works beautifully even if it cannot convince us that the play is equal to Shakespeare’s best.

It may be that the Bard, late in his career, decided to have a bit of fun by concocting a play using every stock plot device in the Elizabethan playwright’s bag of tricks just to see if he could pull it off. Cymbeline, based on legends of a British king of the first century AD, is packed with kidnapped princes, raging jealousy, an evil queen, a gullible and gulled king, poison plots, a cross dressing heroine, false friends and faithful servants, a wager won with deceit, mistaken identities, a war between Britain and Rome, and even a flying visit from the god Jupiter astride a giant black eagle.

And damned if Cimolino and his uniformly excellent cast don’t pull it off. At play’s end, all the threads come neatly together in a cascade of revelations and unveilings that mix heart-rending grief and slap your thighs comedy. I’m not sure uproarious laughter was what Shakespeare intended here, but the laughs are in the lines and perhaps it would be too much to expect a contemporary audience to take this kind of melodrama too seriously.

As the young lovers, Innogen and Posthumous, torn apart by the king’s fury and then plunged into despair by the machination of the evil Iachimo, Cara Ricketts and Graham Abbey are superb. Abbey, in particular turns in a star-making performance. Not only can he handle the verse with aplomb and rise to the heights of passion the script demands, he has the good looks and physique of an action hero. If the Festival doesn’t start finding more leading roles in the great plays of the canon (he has already played Henry V) for him they are missing a bet.

Festival stalwarts Tom McCamus as the villain Iachimo and Geraint Wyn Davies as Cymbeline also give good account of themselves, although inexplicably they have been directed to whisper some of their lines rendering them all but inaudible even in the second row of the intimate Tom Patterson Theatre. Mike Shara is delectable as the vainglorious, idiotic, and aptly named Cloten, who lusts after Innogen and hopes to ascend to the throne.

To single out others in the company worthy of note would mean reproducing virtually the entire cast list, so I will refrain. Suffice it to say that there is scarcely a false note struck in the entire three-hour running time of this epic tale.

Kudos, too, to costume designer Carolyn M. Smith and set designer Scott Penner who makes the most of an essentially bare stage and who is, I assume, responsible for that eye-popping eagle. Highest praise, though, goes to director Cimolino who has drawn psychologically acute performances from his large cast and who keeps the action humming along at a breakneck pace. Aided by fight director, Kevin Robertson, he throws in one of the most exciting stage battle scenes you are likely to see in quite a few years.

Cimolino becomes artistic director of the Festival next season, replacing the estimable Des McAnuff, and his ascension to that role augurs well for future Shakespeare productions. I for one can’t wait to see how he takes advantage of the much larger space and expanded technological capabilities of the Festival Theatre!

Cymbeline continues through September 30, 2012, at the Tom Patterson Theatre.