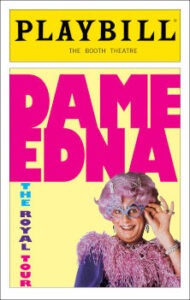 Attention, Possums! Dame Edna Everage, Australia’s First Lady, has arrived on Broadway. The time has come to dress to the nines and make the pilgrimage to 45th Street to prostrate yourself at her exquisitely-shod feet.

For those who don’t know, Dame Edna is the alter ego of Australian-born, London-based comedian Barry Humphries. Over the years he has elevated Edna from typical Australian housewife (Say “average” with an Australian accent) to a bespangled mega-star who hobnobs with royalty and dispenses wisdom and insight to her adoring fans

Her current engagement on the Great White Way is a cheerfully chaotic mishmash of ad libbed encounters with the audience and off-the-wall set pieces on topics such as how to fool your aged parents into believing they’ve just taken a wonderfully expensive vacation. It’s not quite a one-woman show — there’s a pianist and two longlegged chorines to assist in Edna’s occasional outbursts of song — but this show is all about Edna.

And what makes Dame Edna so special? Why, simply being Dame Edna, of course. And that is largely Humphries’ subversive point here. Dame Edna is all about our society’s infatuation with celebrity and the self-effacing masochism with which we allow celebrities to live our lives for us. Dame Edna is sure that her possums, her pet term for the audience, want nothing more than to bring a slender ray of glamor into their otherwise miserable lives by basking for two hours or so in her reflected glory. And if that means being humiliated because they’re sitting in the cheap seats or wearing frumpy clothes, so be it. Some of the funniest moments come from the glibly sadistic way in which Dame Edna, in the most “caring and nurturing way,” points out how shabby various members of the audience are compared to her regal self.

The resulting show is never short of funny and most often hilarious to the point of tears. The good news is that you don’t really need to know anything about the history of Dame Edna to appreciate this show, which in itself probably says something about how eager we are to abase ourselves. All we need to know is that Dame Edna is an international mega-star and we take it from there. A short filmed introduction of clips chronicling Edna’s rise and rise is provided for those slow on the uptake.

This is the sort of show we used to go to cabarets in the Village for but the Broadway setting (Dame Edna makes subtly snide remarks about how small the house is) seems to suit the great lady’s iconic status. Dame Edna is, of course, a man in drag, but that doesn’t mean this is just a drag show. “She” plays shamelessly to the gay audience, among which she seems to have quite a following, but Dame Edna transcends all gender barriers. She is, indeed, a woman for all seasons and sexual persuasions. If you’re looking for an uproarious good time in the theater, unencumbered by such niceties as plot and literature, look no further.

A word of warning though: Don’t sit in the first several rows unless you have a strong ego, unshakable self-esteem, and a smashing wardrobe. And whatever you do, don’t come late!

Dame Edna: The Royal Tour is at the Booth Theatre, 222 West 45th Street.