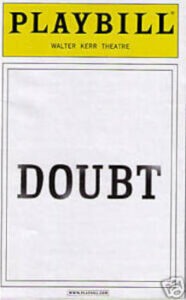 No doubt about it, John Patrick Shanley‘s Doubt is the best new play to hit Broadway in a good long while. In fact, it restored my faith in American drama.

Set in the Bronx of Shanley’s youth, it tells the story of the struggle between the crusty old nun who runs the parochial school with an iron hand and the charismatic young priest she believes has molested one of her young charges.

But before you think we have another anti-Catholic screed like Sister Mary Ignatius or a lurid exploitation piece playing on Catholic weirdness a la Agnes of God, think again. Tellingly, the play is subtitled A Parable and, like the tales told by Jesus to illustrate a point, Doubt has resonances far beyond the immediate points of the plot.

Father Flynn (Brian O’Byrne) is straight out of an old Bing Crosby/Barry Fitzgerald movie, the kind of young, idealistic priest that everyone adores. He’s a terrific homilist, too. He gives two in the course of the play, delivered straight to the audience-as-congregation and I think if I could be guaranteed sermons like that I might become a regular churchgoer. He also seems to have a way with kids, as evidenced in another terrific vignette in which we become the members of the basketball team he coaches.

But Father Flynn’s way with kids might have a darker side. Sister Aloysius (Cherry Jones), the principal, is convinced he’s up to no good with the young black kid who has recently transferred to the school and she enlists the help of Sister James (Heather Goldenhersh), the idealistic young nun who, in Sister Aloysius’ view, wants too much to be liked by her students, to help get the goods on him.

Thus the stage is set for an elaborate game of cat and mouse that Shanley sketches in with the deft touch of master portrait painter in a series of scenes that build doubt upon doubt in an attempt to forge certainty.

Hoping to gain an ally, Sister Aloysius calls in the boy’s mother (Adriane Lenox), who brings to the situation a street-wise savvy that takes the good Sister aback and adds yet another layer of complexity to the moral calculus the play forces us to undertake.

Shanley does a brilliant job of leading both his audience and his characters to the brink of certainty while leaving room for the profoundest of doubts.

The four performers are all superb, none more so that O’Byrne and Jones. Director Doug Hughes has encouraged his players to make what actors like to call “big choices” and then has carefully restrained them from stepping over the boundary of “too much.” The result is a series of colorful and idiosyncratic portrayals that will stay with you long after you’ve left the theater.

With Doubt, Shanley makes the transistion from promising young playwright to established master. His next Broadway outing will be eagerly anticipated by a great many people, I’m sure. But don’t wait until then. See Doubt now.

UPDATE: Doubt won the Tony for Best Play of 2005 and the Pulitzer Prize for drama. All four performers were nominated for Tonies; Cherry Jones and Adriane Lenox won. Doug Hughes won the best directing Tony.