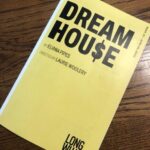 Playwright Eliana Pipes has furnished her new play Dream Hou$e (as it is styled in the program) with an abundance of themes in a variety of styles. The overall effect is striking but cluttered.

The Castillo sisters are trying to sell their recently deceased mother’s century-old house in a rapidly gentrifying neighborhood. Patricia, the elder, (Renata Eastlick) is an upwardly mobile accountant eager to sell and move on. Her kid sister, Julia (Darilyn Castillo), a middle school social studies teacher, is hesitant, clinging to her somewhat idealized sense of family history and ethnic solidarity. Ironically, Pipes’ rather trenchant exploration of the transformation of an ethnic neighborhood by more affluent, presumably white buyers, is undercut by the now-standard pre-show reminder that we are sitting on land expropriated from nearly extinct Native American tribes that most audience members would be hard-pressed to name at the end of the show.

Of course, like any sisters in a play that aspires to drama, the Castillo sisters have “issues” that play out as the play progresses.
In hopes of a big payday, Patricia has decided to sell via one of her favorite home improvement shows on TV — “Flip It and List It” — hosted by the smarmy but charming (and ultimately kinda scary) Tessa (Marianna McClellan). The process involves the examination, redecoration, renovation, even demolition of the Castillo home as a camera crew records the sister’s every reaction.

“Flip It and List It” allows Pipes to provide some telling, often funny, commentary about reality TV, the kind of all-American consumerism (and avarice) that transcends ethnic categories, the Kardashian-like eagerness of people to expose themselves on television, and the almost sadistic way television programmers exploit that weakness.

As Tessa pokes and prods and sets sister against sister, those “issues” emerge. Julia, who is six months pregnant and prides herself on her allegiance to her roots, derides Patricia’s “assimilation” (she pronounces her name in the Anglo fashion) and her desire to join a country club. Patricia, for her part, bitterly resents the fact that Julia left her alone to care for their dying mother. And that’s merely some of the bones of contention on offer.

As if that grab bag of themes wasn’t enough, Pipes veers from realism, to heightened realism, to scenes that can only be described as surreal in which Tessa’s relationship with her subjects becomes uncomfortably, if arrestingly, Freudian.

Dream Hou$e may not be completely successful, but director Laurie Woolery has given it a persuasive production. She also elicits superb performances from her actors. Renata Eastlick’s Patricia has perhaps the most dramatic moments in the script and she rises to the occasion with blistering passion. For her part, Darilyn Castillo makes the more subdued and rather uncentered Julia utterly sympathetic. And Marianna McClellan’s Tessa will remind you of every time you wanted to hurl something at a television screen. A squad of black-clad, non-Equity actors serves both as Tessa’s camera crew and as stagehands who swiftly and silently make the many changes required on Stephanie Osin Cohen’s serviceable set. Mark Holthusen’s clever projections and Paul James Prendergast’s sound design ably convey both the excesses of Tessa’s TV show and the play’s more surrealistic moments.

Long Wharf is thoughtful enough to provide audience members with N95 masks and wise enough to insist that they be used.