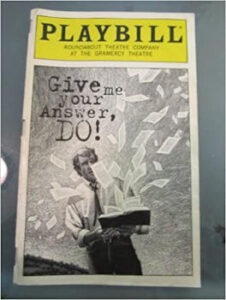 Give Me Your Answer, Do

No one writes more incisively or more lyrically about the plight of the artist in society than Irish playwright Brian Friel. In Faith Healer he presented a bleak vision of the artist destroyed by his audience for failing to produce instant redemption. In his latest play, Give Me Your Answer, Do, he is only slightly less metaphorical in exploring the relationship of the artist, particularly the writer, to fame, fortune, and family. The play has the painful immediacy of a cri de coeur and you can’t help wondering how much autobiography is being served up here.

Tom Connolly (John Glover) is a literary novelist whose royalties have dwindled with his output. He lives in genteel if increasingly grating poverty in a faded manse in Friel’s fictional backwater, Ballybeg, County Donegal, where so many of his plays are set. His long-suffering wife, Daisy (Kate Burton) endures their reduced circumstances with a mixture of stoicism and gin, while their daughter Bridget (Woodwyn Koons) languishes, catatonic and silent in a padded basement cell of a nearby asylum.

Friel brings two other couples to call: Daisy’s parents (Joel Grey and Lois Smith) and a fellow novelist and his wife (Gawn Grainger and Helen Carey). Tom’s father-in-law is a semi-retired cocktail pianist, his wife a might-have-been doctor. The novelist, Garret, is far more successful than Tom which doesn’t keep is wife from constantly berating him for not being better.

What plot there is is provided by the presence of David Knight (Michael Emerson), a representative of an unnamed Texas university that is seemingly intent on buying up the literary estates of every Irish writer of at least modest renown. He has already purchased Garret’s archive, making him comfortably well off. He is now coming to the end of the week-long process of deciding whether Tom’s lifetime of manuscripts, ephemera, and correspondence should be added to the collection – a purchase that would rescue Tom and Daisy from their creditors and provide for their disabled child.

Friel’s real concern, however, is to work through his notions of how writers, indeed all artists, survive the constant tug of war between the desire for fame and the fortune it brings and the need to remain true to their art. A parallel theme is the relation of the wives, none of them artists themselves, to their creative mates. All seem to have suffered yet none seems capable of turning away from the men who, to use the phrase of Daisy’s mother, have filled their heads with music.

Give Me Your Answer, Do showcases many of Friel’s trademark skills. There is the bold use of symbol and metaphor, for example. Few playwrights could bring the writer’s pathetically disabled daughter on stage without falling headlong into sentimental bathos. Friel not only pulls it off but creates a final tableau that can rip your heart out. And Friel continues to write characters that are actors’ dreams, rich in nuance and filled with the quirks that distinguish real people from a playwright’s conceits. The play is filled with revelatory moments that, done well, can take your breath away.

There are missteps as well. The George and Martha routines of Garret and his wife are equal parts Albee and Beckett and seem slightly shopworn and, for me at least, the denouement left something to be desired.

This is dense material that demands a great deal of the audience and your enjoyment of it will probably depend to some extent on how willing you are to give yourself over to contemplating the psychic pain of a brilliant and highly successful writer who’s probably making a lot more money than you are, so what does he have to complain about?

It is also material that demands a sure directorial hand and here Kyle Donnelly is only partly successful. Joel Grey and Lois Smith, fine actors in the right setting, are miscast as Daisy’s parents and the piece suffers for it. Donnelly’s direction also lacks the careful pacing and rhythm Friel’s work demands (it’s not for nothing he’s constantly likened to Chekhov). Perhaps that will come as the cast gains more experience with the piece (I caught a preview).

However, there’s much to celebrate here. Kate Burton is smashing as the self-medicating Daisy and John Glover, whose handsome face seems to be crumbling right along with the manse he lives in, turns in another powerful performance. His final speech, alluded to earlier, left the audience I saw it with in stunned silence. Also earning high marks is Michael Emerson as Texas’s high-strung literary agent, and Gawn Grainger and Helen Carey are just right in their Battling Bickersons roles. Thomas Lynch‘s wonderful set is a triumph over the cramped quarters of the Roundabout’s temporary home in a converted movie house and Kenneth Posner‘s lighting brings an elegiac tone to the long day on which the action takes place.

This may not be the ideal production of Give Me Your Answer, Do but it comes tantalizingly close and offers substantial rewards for the serious theatergoer who relishes a little intellectual exercise.

Give Me Your Answer, Do was produced by the Roundabout Theatre Company at its temporary home at the Gramercy Park Theatre.