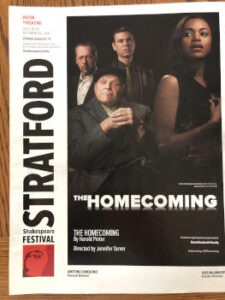 Harold Pinter is a playwright of such profound idiosyncrasy that he has his very own adjective – Pinteresque. And if ever there was a Pinter play that deserves that soubriquet it’s The Homecoming, which is being given a top drawer, if somewhat flawed, revival by the Stratford Shakespeare Festival at their downtown Avon Theatre.

Teddy is returning to the drab working class London home of his youth. Since his unexplained departure he has acquired a PhD, an American academic career, and a wife. His father Max and brothers Lenny and Joey seem less than enthralled to see him back. Only his uncle Sam has a kind word for him. What follows from this sparse set up is a profoundly unsettling sequence of events bristling with casual cruelty and sexual degradation.

Personally, I feel that rummaging through Pinter’s plays in search of the “key” to their meaning is a fool’s errand. I prefer to think of him as the theatrical equivalent of an abstract painter. But if they don’t have “meaning” his plays most certainly have tone and mood. His work has been described as “the comedy of menace” and that seems fair enough. There are laughs here certainly, but The Homecoming leaves you with a deep sense of unease in the pit of your stomach.

The key then is in the performance and the ideal Pinter actor brings to his role a certain stylization that allows us to see the character as at once perfectly believable and yet oddly surreal. For the most part, director Jennifer Tarver’s cast gets it right. Aaron Krohn, making a smashing Stratford debut, is nothing short of brilliant as Lenny, the creepy pimp of the family. He quite literally makes your skin crawl. As the dumb as a post would-be boxer Joey, Ian Lake is also spot on. (These two, by the way, appear almost anonymously as rock musicians in Twelfth Night.)

The charming Mike Shara makes a solid Teddy, the returning son, but Cara Ricketts as his wife could have been a bit more inscrutable and sphinx-like for my taste. As the pater familias Max, Brian Dennehy gives a nicely naturalistic performance that unfortunately lacks that additional edge of unreality that serves the others so well and that would have made this production really soar.

In most productions of The Homecoming, the “star’s” bow goes to Max, but here the director (I am assuming) gives it to Aaron Krohn’s Lenny and deservedly so. Let’s hope this American actor returns for more seasons at Stratford.