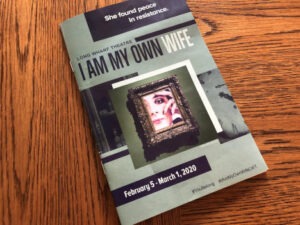 The play revolves around a real-life German transgender woman who was born Lothar Berfelde, but who lived most of an incident-filled life as Charlotte von Mahlsdorf. Today, we would simply say Charlotte identified as female and leave it at that, but Lothar/Charlotte was born in 1928 and she maintained her distinctly different, not to mention dangerous, persona during the reign of both the Nazis and the East German secret police, the Stasi. It’s a remarkable tale of survival.

Charlotte was something of an antiquarian, with a special interest in old Victrolas and the wax cylinders they played. She created what she called her “museum” and also somehow managed to host a gay, Weimar-style cabaret in her basement. Needless to say, her sexuality caused problems for the various regimes that controlled her corner of the world and she paid a price. With the fall of the Berlin wall, she became something of celebrity, but the harsh light of fame and the revelation that she had been a Stasi informant caused many to question the veracity of her version of her life story. Had she really killed her Nazi father? Why was there no record of the murder?

Curiously, Wright has injected himself into the play, telling us the story of how he discovered Charlotte’s existence, his growing fascination with her life story, the many interviews he had with her, and the process of writing his play. Presumably he made this choice because, once doubts arise about the accuracy Charlotte’s life story, the framing device allows him to interrogate the nature of storytelling – what’s more important? The truth or the reality you create to validate yourself? Even so, the device is awkward at best.

The actor who plays Charlotte also plays a whole host of other characters who enter her life. I wasn’t counting, but it’s over thirty, some of whom have only a line or two. Mx. Park (they identify as non-binary and Mx. is the proper honorific and they/them are the preferred pronouns) is up to the task, switching accents, registers, and characterizations with ease.

Unfortunately, the director, Rebecca Martinez, has not provided Mx. Park the steady directorial hand a role like this demands. The German accents that are used for much of the play were often hard to decipher and soft-spoken moments tended to be inaudible. Sometimes it was hard to determine who was speaking to whom in the rapid-fire transitions from character to character.

Part of the problem was costuming. Charlotte wears a series of costumes (by Daniel Tyler Mathews) that range from a housedress, to a black negligee, to a smashing red number that (finally!) matches her red shoes. I found it made some of the conversations and character shifts hard to follow. The original production (Jefferson Mays as Charlotte, Moisés Kaufman director) put the actor in a close-fitting black outfit that resembled the habit of a particularly severe order of nuns, a much more neutral canvas on which to project those multiple characters.

I also couldn’t help feeling that Mx. Park was capable of a much deeper and more powerful evocation of Charlotte, but that Ms. Martinez didn’t challenge them, content to tick off the multiple characters and leave it at that.

Britton Mauk has contributed an imaginative set that rings the stage with dozens of colorful Victrola horns and Liam Bellman-Sharpe has provided effective incidental music. I found the lighting by Jennifer Fox distracting, but that’s the sort of lapse to lay at the director’s feet.

This production could mark a sea change in how this play is produced in the future, starting with the casting of a non-binary actor in the role of Charlotte. Indeed, the entire production is informed by contemporary gender sensitivities. The bios of the creative team list everyone’s preferred pronouns and the team includes a “cultural competency consultant.” Welcome to the twenty-first century.

All the previous Charlottes (as far as I know) have been portrayed by straight or gay men. With the trans community becoming increasingly assertive both in the theatre and elsewhere, I wonder if in the future the role will become the sole purview of trans actors. And what would be the reaction if a cis-hetero female took the role? We live in interesting times.