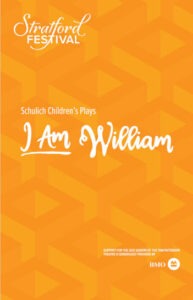 I Am William At The Stratford Festival

I Am William is, not to put too fine a point on it, an atrocity, doubly so because it was presented as part of the Schulich Children’s Play series. If corrupting the youth was still a capital offense, as it was in ancient Greece, everyone responsible for mounting this play would long since have downed a beaker of hemlock.

I Am William was conceived by Québécoise playwright Rébecca Déraspe (Leanna Brodie is credited with the English translation) in what I can only imagine was a fever dream of hyper-feminist misandry. Its premise is that in Elizabethan England it was illegal to teach girls how to read, let alone write. Early in the play we hear of a girl who was found to be literate and was “tried” as a witch. In other words, she was murdered.

All of this is complete bollocks, of course. But I Am William would have little girls and boys believe that William Shakespeare had a twin sister who, against incredible odds with certain death lurking should she be discovered, was the real author of the plays attributed to him. Good grief.

Yes, there is a convoluted disclaimer of sorts near the beginning of the play that lets us know that what we are about to see is fiction, but that this is history as it should have been. Huh? Wha? Alternative facts strike again.

I do not have the historical chops to point out the many untruths on which Déraspe builds her play, so let me refer you to Christopher Hoile’s masterful contemporaneous take down of this misbegotten production.

All the performers and musicians, whom I will honour with a cloak of anonymity since none of them was responsible for this nonsense, acquitted themselves admirably. Director Esther Jun, it must be said, found some inventive ways to stage the play. But at the end of the day, the Stratford Festival should be ashamed of itself for perpetrating this calumny.