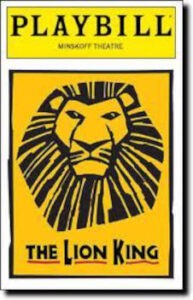 One of the curious features of the contemporary Broadway stage, is a group of large and lavish musicals that have seemingly run forever, attracting large numbers of out-of-town tourists who are largely responsible for their longevity. Some have been critical successes like The Lion King at the Minskoff Theatre, others have succeeded in the face of critical scorn. Ultimately, they seem to defy the normal laws of theatrical runs, becoming permanent fixtures of the New York landscape like the Statue of Liberty or the Empire State Building

The Lion King is one such phenomenon, and one of the best, thanks largely to the lavishly and rightly praised production of director Julie Taymor. Her innovative and much copied use of puppets and performer-puppet hybrids still has the power to charm and amaze. Add to that Richard Hudson‘s lyrical sets and Taymor’s colorful costumes and you have the most enchanting spectacle on Broadway.

The Lion King tells the tale of a murdered king, his feckless son, and a usurping uncle. Shades of Shakespeare! But this is a Disney production and the real source is a Disney animated film of the same name and anyone who says Disney stole the plot from a Japanese animated film is itchin’ for a fight. But that’s all beside the point. The wafer-thin and perfectly harmless story is just an excuse for a very enjoyable production.

Oh yes, and there’s music, too. Some of it is African, like the setting, and if Disney had had the courage to run with that concept “The Lion King” might have been truly exceptional. Instead, they called in Elton John and Tim Rice, with the result that the African songs, most of them by South African Lebo M, are the best thing in the show. The only John-Rice song that is truly memorable is “Hakuna Matata” and that may only be because we’ve heard so often elsewhere.

But that, too, is beside the point. This is a tourist attraction, after all, and a family show to boot, certainly not an attempt to create great art. Except, of course, for Julie Taymor’s marvelous vision which manages to elevate a light-as-a-feather bit of theatrical fluff to something approaching high art.

There are no stars in The Lion King, and like other long-running hits in the same league (Les Miserables, Phantom of the Opera) there seems to be no need for star power. The performers are all pros who do what’s required of them. The real star is the production. Take the kids and pony up for the expensive seats downstairs. The special effects and the stage pictures look better from down there.