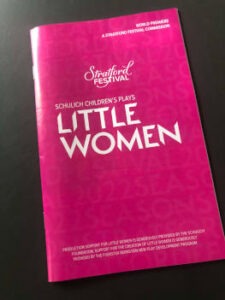 Little Women At The Stratford Festival

Little Women by Louisa May Alcott is a quasi-autobiographical novel about the March family of Concord, Massachusetts (not Connecticut as the Director’s Note would have us believe). Set during the Civil War, it relates the travails of the March family – Meg, Jo, Beth, and Amy and their mother, whom they call “Marmee.” Their father, Pastor March, has gone to serve as a chaplain for the Northern Army, leaving the family in somewhat precarious financial straits. The novel follows this loving (some might say impossibly loving) family through the girls’ teenage years and into young adulthood. It teaches the salutary lessons that life can be hard but also beautiful and that you can’t always get what you want.

Alcott, a struggling writer, wrote it quickly for money, a fact mirrored in the novel, with Jo standing in for Alcott. It was an instant success and made Alcott’s fortune and reputation. Today, it holds a cherished place among beloved novels that appeal to young people – perhaps not surprisingly, mostly girls. (Alcott tried taking a whack at Little Men as a follow up. It didn’t succeed nearly as well.)

When the new adaptation of Little Women by Jordi Mand, the Schulich Children’s play at the Stratford Festival’s Avon Theatre, hews close to its source material it is remarkably effective, and truly moving. Fortunately, that is a good bit of the time.

However, there are some bizarre directorial touches that I suspect those with a strong sentimental attachment to the book will find not quite “commy la fo,” as a young Amy March might say.

It would seem that director Esther Jun didn’t trust the material and felt it necessary to goose things up to appeal to an audience of twenty-first century youngsters.

Some of the additions and “improvements” are perfectly understandable, indeed laudable. Whereas the book is never specific as to why the Civil War is being waged, Mand’s script makes clear the moral stakes. In a later scene, Professor Bhaer takes the grown-up Jo to a “philosophical discussion.” Appalled by a stereotypical bunch of misogynistic men, she launches into an impassioned speech about women’s rights that earns a well-deserved round of applause from the audience.

Then there are the weird and cringe-worthy musical and dance interludes – the March girls get invited to the occasional party – that made me scratch my head. Set to ghastly contemporary pop music, they seem to aspire to being ever so hip and up to date. I hated them and I suspect that members of the TikTok generation in the audience probably thought they were kinda lame, too. (Alyssa Martin, who has actual choreographing credits to her name, is credited as “Movement Director.”) Just when I had managed to put them out of my mind, the conceit was repeated in the curtain call.

When Jun “plays it straight,” this Little Women is quite successful. I found myself experiencing real emotions that eluded me in the pages of Alcott’s novel. It helps that Jun is blessed with a terrific cast. Verónica Hortigüela (Meg), Allison Edwards-Crewe (Jo), Brefny Caribou (Beth), and Lindsay Wu (Amy), to list them in order of their characters’ ages, are all excellent, although I must confess that my favorite was Amy, annoying little snip that she is through much of the play. Edwards-Crewe is the star of the show, functioning as she does as a narrator who frequently breaks the fourth wall to set the scene and manage segues. She makes a fierce and forceful Jo. As Marmee, Irene Poole turns in a pitch-perfect rendition of an impossibly saintly mother and Marion Adler does an equally impressive job of bringing old Aunt March to life.

Two of the men are equally impressive, both of them in multiple roles. Rylan Wilkie, outstanding as Parolles in this season’s All’s Well That Ends Well, does especially well as Professor Bhaer. John Koensgen is faultless as James Laurence, Dr. Bangs, and Jo’s crusty publisher, Mr. Dashwood, and he’s utterly distinct in each role. The younger men fare less well. Richard Lam is serviceable as Laurie, but why Jun chose to give us a socially awkward if amiable goofball as John Brooke is beyond me.

Teresa Przybylski has contributed a malleable set with some nice touches. I especially liked the way the cutout trees gained and lost leaves as the seasons progressed. The showers of petals that attended Meg’s wedding march were a lovely touch, too. A row of miniature house facades lines the upper proscenium. Kaileigh Krysztofiak’s lighting picks them out to indicate the setting of the current scene. A.W. Nadine Grant has provided costumes for the little women that get more sumptuous as they grow up. The outfits that she has crafted for the early dance numbers are as gawdawful as the numbers themselves, but that is presumably what she was asked to supply.

This Little Women is a mostly enjoyable experience. Stripped of the bizarro baggage, it could have been a real winner.

A footnote: This production, a world premiere and a “Stratford Festival commission,” is the most pointedly “politically correct” show I can remember the Festival presenting. A voice-over prologue provides a long list of indigenous tribes from what is now Massachusetts and Rhode Island that were decimated by European settlers to make way for the Concord where the March family lived. None of this, perhaps needless to say, is mentioned by Alcott. The multi-ethnic casting of the March girls – Black, Indigenous, Asian, White/Hispanic – is neither accidental nor incidental. Virtually the entire artistic company (as opposed to the acting company) is female, and a distinctly feminist sensibility permeates the text and the performance. Again, this is neither accidental nor incidental. The far-right, white-supremacist, anti-vax yahoos who comprised the “Freedom Convoy” that disrupted Ottawa and some border crossings not too long ago would loathe this production. And that, I’m pretty sure, is the point. Brava!