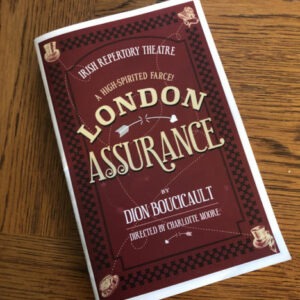 London Assurance at The Irish Rep – A Review

After the deaths of Richard Sheridan (School for Scandal) and Oliver Goldsmith (She Stoops To Conquer), the English-speaking stage seems to have lain fallow until the emergence in the late nineteenth century of Oscar Wilde and George Bernard Shaw, at least when viewed from our contemporary perspective. Yes, theatre continued, even flourished in this period, but modern directors and producers have found little from this almost century-long period worthy of revival.

A dazzling exception is Dion Boucicault’s London Assurance of 1841, which is receiving a welcome revival at New York’s Irish Rep. Boucicault was born in Ireland (as were Sheridan and Goldsmith), but made his career as a multi-hyphenate actor-playwright-producer in London and New York. London Assurance is early Boucicault, a comedy of manners, which shows the strong influence of Sheridan. Its contrived plot and liberal, sometimes too liberal, use of asides can make it seem old-fashioned to a modern audience, but other elements seem eerily modern, such as this memorable joke: “My wife ran off with my best friend . . . and I miss him.” You can almost hear the rim shot.

London Assurance chronicles the romantic and financial adventures of Sir Harcourt Courtly (Colin McPhillamy) and his wastrel son Charles (Ian Holcomb). Sir Harcourt, an ageing roué in search of a young, rich wife, is making arrangements with Max Harkaway (Brian Keane) to marry his niece and ward, eighteen-year-old Grace (Caroline Strang). Grace’s late father, a dear friend of Sir Harcourt, decreed in his will that if, on reaching nineteen years of age she marries Sir Harcourt, the estate will pass to her, or more accurately to Sir Harcourt, since in those halcyon days a woman’s wealth went to her husband when she married. Should the marriage not take place, the estate would pass to Harcourt’s son, Charles.

Meanwhile, the drunkard Charles has acquired a friend of sorts, the Irish scalawag Dazzle (Craig Wesley Divino) who affects a posh accent to curry favor with and sponge off of  “the quality.” Dazzle manages to charm Harkaway and wangle an invitation to Harkaway’s country estate, where arrangements for the nuptials will be concluded.. Charles accompanies him under an assumed name.

In the country, Charles falls under the spell of Grace while Sir Harcourt finds himself bewitched by the deliciously named Lady Gay Spanker (Rachel Pickup), somewhat more age-appropriate although married. Needless to say, hilarity ensues and all is made right by the final curtain.

Material of this sort requires a deft touch in production with over-the-top performances that stop just this side of ludicrousness. Under the able direction of Charlotte Moore, this rendition comes close but, alas, no cigar. The 1984 Broadway production starring Donald Sinden and Judi Dench was much closer to the mark.

Generally speaking, the older performers fare best in mastering the style the piece requires. Mr. McPhillamy is excellent as Sir Harcourt, flirting with hamminess but never crossing the line. Ms. Pickup makes a delightful Lady Gay, while Robert Zuckerman scores as her much older and much put-upon husband. Of the younger generation, Mr. Divino is impressively impish as Dazzle. Mr. Holcomb and Ms. Strang make attractive young lovers, but don’t manage to make their love scene, which should be a highlight of the play, catch fire.

James Noone has created an ingenious set, complete with a turntable, for the Rep’s postage-stamp stage and Sara Jean Tosetti has provided attractive period costumes that take occasional liberties to amusing effect.

After London Assurance, Boucicault went on to churn out a steady stream of melodramas, which were all the rage in the mid-nineteenth century, but which have not aged nearly as well as London Assurance. The Irish Rep is to be commended for keeping this worthy, if imperfect comedy in the repertory.