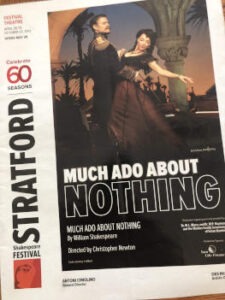 Much Ado About Nothing

In Much Ado About Nothing, Beatrice and Benedick are the fun couple of the William Shakespeare canon. As seemingly incompatible as oil and water they are nonetheless fated for each other and the pathetic fallacy of their inevitable coming together, engineered with a clever trick by their friends, is what makes them so indelible in our memories and makes Much Ado a perennial favorite.

It’s a special treat when we get to see the parts played by a real-life married couple and in the Stratford Shakespeare Festival’s delightful production of Much Ado About Nothing at the Festival Theatre the couple in question is Deborah Hay and Ben Carlson, both Festival stalwarts. It’s an interesting choice.

Perhaps because neither of them are in, shall we say, the first bloom of youth, director Christopher Newton seems to have chosen to emphasize their age. So Beatrice becomes a sort of old-maid-in-training, all flutters and dithery indecision. I found it a bit distracting, especially since Ms. Hay is more than capable of turning in a far more sophisticated portrait.

Still, one can’t fault her comic timing and a pratfall on the curving staircase that dominates Santo Loquasto’s set is sheer brilliance. Once I got past my initial misgivings, I found her performance quite enjoyable.

Ben Carlson gave his usual solid performance, but the fact that it seemed barely indistinguishable from the one he gave in last season’s Misanthrope was vaguely disconcerting. His delivery tends to be precise and emphatic giving his sparring with Beatrice something of a donnish quality.

If one can quibble with the central performances, the rest of the Much Ado About Nothing cast is above reproach. As the young lovers torn asunder by a vicious slander, Hero and Claudio, Bethany Jillard and Tyrone Savage are near ideal. Savage even makes Claudio almost sympathetic, a feat many feel is impossible. Juan Chioran as Don Pedro and James Blendick as Leonato are impeccable and, under Newton’s deft direction, they turn the scene in which they make an eavesdropping Benedick believe Beatrice is madly in love with him into comic bliss. And Timothy D. Stickney manages to stand out in the small role of Friar Francis.

For reasons that remain opaque to me, Newton chose to set his production in early twentieth century Brazil, but at least it doesn’t distract from the goings on and it allowed Loquasto to create some spiffing military uniforms.

This production of Much Ado About Nothing may not be the best the Festival ever mounts but for now ‘twill serve.

Much Ado About Nothing continues at the Festival Theatre though October 27, 2012.
For more information visit www.stratfordfestival.ca.