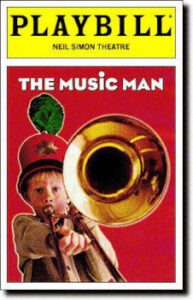 If everyone who ever appeared in a high school production of The Music Man comes to see this high-powered revival at the Neil Simon Theatre, the show will run forever. In fact, it deserves a long run in any case.

Meredith Willson‘s endearing fable of the con man who comes to River City in search of easy money and finds redemption in the love of a local lass has been given riotous new life by protean director-choreographer Susan Strohman. Strohman’s other Broadway offering this year, Contact, won her the Tony, but The Music Man, for which she was also nominated, is the sentimental favorite.

And why not? This show harkens back to an era when being old fashioned was very much in style. Anyone who doesn’t like this lollipop of a musical has clearly overdosed on the detached irony that has become so chic of late.

Stepping into the oversized shoes of Robert Preston as Henry Hill; would be an awesome assignment for the most experienced song and dance man, but Craig Bierko a Broadway newcomer from out Hollywood way rises gamely to the challenge. He has the fey elegance of Jack Benny (whose moves he seems to have studied assiduously) and is utterly charming. He may lack the edge of sexual danger the part seems to cry out for and he’s so likable from the beginning that his transformation at the end seems a foregone conclusion. But why bicker. Let’s just call it a Harold Hill for the new Disneyfied Times Square and get on with. The audience clearly adores him.

The much nominated Rebecca Luker, a Broadway veteran of Sound of Music, Showboat, and The Secret Garden turns in yet another smashing performance. Her straight from the soul rendition of “Till There Was You” literally stopped the show the night I saw it. It’s one of those performances that reminds you why Broadway still matters.

Good as the leads may be, the real star of the show is Strohman. The Music Man has a large cast, many of them children, some of them getting on in years, and very few dancers. But Strohman has everyone in town dancing up a storm, or at least moving to music in elaborate and inventive numbers that turn the stage into a kaleidoscope of energetic action. Seldom has non-dancing looked so good, and the small cadre of professional hoofers in the company are deployed to excellent effect.

The Music Man ends, as it should, on a colorful high note that has everyone on their feet clapping and cheering. So if you were one of the several million Americans who appeared in The Music Man in high school come see how the pros do it. You’ll be glad you did.