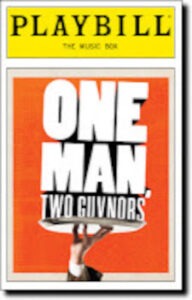 One Man, Two Guvnors, currently packing them in at the Music Box, is billed as “based on” The Servant of Two Masters by Venetian playwright Carlo Goldoni. But this show, fresh from a sold out run at London’s National Theatre, is not so much an adaptation of Goldoni’s work as it is a travesty.

And I mean that in the nicest possible way.

Richard Bean uses Goldoni’s 1745 farce as a springboard into a surreal comic world set in 1963 that owes just as much, if not more, to a witches’ brew of English pantomime, low-brow comedians (think Benny Hill), and modernist British humor (think Monty Python) as it does to the conventions of Italian commedia dell’arte. But then Goldoni was down with allowing local productions to adapt as they saw fit.

The result is pure comic bliss. That’s no small feat because the sort of arch comic shtick liberally employed here can all too easily cross over into teeth-grindingly overdone tripe. Under the steady hand of director Nicholas Hytner, however, the uniformly gifted cast cavorts right up to that line but never crosses it.

That would seem enough to cause plenty of comic confusion but the crook turns out to be not the crook, but the crook’s twin sister in disguise and the upper class swell is that sister’s secret love, not to mention the murderer of her brother. Got it?

As Francis, James Corden is pretty much perfect. Francis is a descendant of Arlequino, a stock figure in commedia dell’arte, a nimble trickster ruled by his baser needs who is at once dumb as a post and sly like a fox. The key to making the character work is pure charm, which Corden supplies in copious amounts. Corden steps out of character and breaks the fourth wall regularly and with hilarious results, kibitzing with the audience, inviting folks on stage to aid and abet his labors, and making a hash out of any sense of verisimilitude. It’s commedia dell’arte for the Age of Irony.

But while Corden gets the lion’s share of critical praise, for my money the show is stolen by Tom Edden as Alfie, a hapless, doddering, wall-eyed, seemingly crippled eightysomething waiter who is not in Goldoni’s original. He takes forever to walk across the stage holding a pile of plates that clatter about uncontrollably yet never fall and you wish the bit would never end. Alfie is straight out of the fabled Whitehall farces and could have been offensive in the extreme, but in Edden’s capable hands the character becomes a high point of the play. Who knew an actor could be battered about so much and still remain standing? And who knew there were that many different ways of falling down a flight of stairs? The program credits Cal McCrystal as “physical comedy director” and I can only assume that some of the credit for Edden’s performance must go to him.

One Man, Two Guvnors also features excellent work  from Oliver Chris as Stanley Stubbers, the upper class smoothie, and Daniel Rigby as Alan Dangle, the brooding would-be actor. But then everyone is pretty marvelous, including members of the ensemble who take on a variety of small but perfectly realized roles.

While he has provided plenty of excuses for acrobatic insanity, playwright Bean has not overlooked the power of the spoken word to reduce an audience to gales of laughter. He is a master of the surreal simile (“She is pure, innocent, unsoiled by education, like a new bucket”) and the obscene aphorism (“Love passes through a marriage faster than sh*t through a small dog”).

Oh, and there’s music, too, in the form of The Craze, a skiffle band that entertains before each act, performing original songs by Grant Olding. Skiffle, for those who don’t know, was a form of pop music that was popular in England in the years before the Beatles changed everything. It’s closest analog, to my ear, is American rockabilly. It’s great fun.

The music also covers scene changes and, in an inspired bit, members of the company come out during these interludes to join the band, playing a variety of instruments including xylophone, car horns, and the bare chest.

If Dick Cheney were to waterboard me, I would be forced to admit that One Man, Two Guvnors is not great theatre, at least in the classic sense. For all their commedia dell’arte artifice, Goldoni’s plays contained the sort of bedrock psychological truth that is only given lip service here, and that in the form of loud raspberries. And the second act never quite manages to sustain the exalted levels of hilarity that characterize the first.

But who cares? I haven’t laughed so hard in a theater in a very long time and this show is destined to be the toast of the town and cart off a slew of Tony Awards. Go see it. (Adult diapers highly recommended.)

Mount your own production: