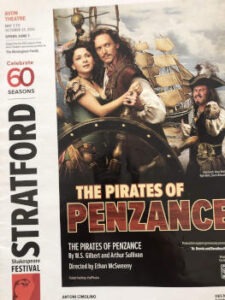 The Pirates of Penzance

Gilbert and Sullivan, once Stratford Festival regulars, are back! And the delightful production of The Pirates of Penzance at the Avon Theatre makes you wonder what took them so long.

The Pirates of Penzance tells the unbelievably silly tale of Frederic a young man with a pathological sense of duty who, thanks to a mix up on the part of his nursemaid was apprenticed to a pirate instead of to a pilot. Having fulfilled his commitment to learn the pirate trade, he has now come of age and is determine to do what every right-thinking Englishman would do and wipe the pirate scourge from Britain’s shores.

Not that this band of pirates is particularly fearsome. They are notoriously soft of heart, refusing for example to take advantage of orphans. Word has gotten around and thus everyone they accost claims to be parentless leaving them rather bereft of booty.

When they happen upon a bevy of girls who are all the wards of Major General Stanley the attraction is as mutual as it is instantaneous. The fact that a middle-aged man had managed to amass such a superfluity of nubile wards might make a modern observer wonder what the old dog was up to but never mind, G & S wrote in a simpler age.

From this wisp of plot, Gilbert and Sullivan extracted an entire evening’s worth of unabashed silliness and fun and, naturally, all ends happily thanks to a plot device every bit as goofy as the basic premise.

American director Ethan McSweeney has set the play in a nineteenth century playhouse as seen from back stage and he and his energetic cast make the most of the theatre within a theatre’s wooden scaffolding and stage machinery.

As Frederic, Kyle Blair is pretty much perfect. With his golden hair, baby-faced good looks and clarion tenor, when the chorus of wards sings of “his beauty” it makes perfect sense. He’s sort of a Victorian Justin Bieber. Equally dishy, but appealing to a slightly different taste, is Sean Arbuckle as the dashing but just too sweet-to-be evil Pirate King, who swashbuckles with the best of them and wears his black and gold pirate duds with panache. As Mabel, the gooey bauble of a maiden who falls for Frederic (and vice versa), Amy Wallis has the vocal chops to make the most of the warbling solos Sullivan gives her and the dewy eyes to match.

There has been some carping from Festival regulars about this production, most of which seem to revolve around the fact that it wasn’t directed by the beloved Brian Macdonald, whose Festival productions of Gilbert and Sullivan in the 1980s have become legendary. The G & S expert with whom I saw the show pointed out that while the Broadway vocal styles employed here were very good indeed, Sullivan’s music benefits from a more operatic approach. And the cameo appearance by Queen Victoria at play’s end is a modern interpolation that does not appear in the original and would have been scandalous if it had.

But those who can enter the Avon without preconceived notions of what they should see will find nothing to complain about. Indeed, I suspect that theatergoers coming to Gilbert and Sullivan afresh will leave the Avon looking forward to the Festival’s next foray into to G & S repertoire, which let us hope will not be too long in coming.

The Pirates of Penzance continues through October 27, 2012, at the Avon Theatre.
For more information: www.stratfordfestival.ca.