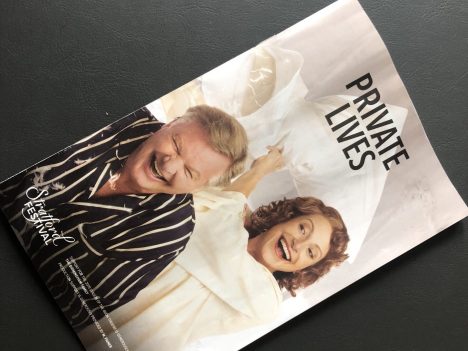 Private Lives at the Stratford Festival

Vodka and vermouth, brandy and Bénédictine, champagne and kyr, none of them are more intoxicating or will make you giddier than the combination of Lucy Peacock and Geraint Wyn Davies in the right comic roles. Elyot and Amanda Chase, the not so gay divorcés of Noel Coward’s 1931 confection Private Lives, are just such roles and Carey Perloff’s production at the Stratford Festival’s Avon Theatre allows us to drink our fill.

Elyot and Amanda are exemplary avatars of the English upper classes with no want of money, no apparent professions, and no purpose in life except to gratify the whim of the moment while carrying themselves as if they were characters in a Noel Coward play, which as a matter of fact they are. Five years divorced and newly married to others, they find themselves on their honeymoons in adjoining rooms with equally adjoining balconies in a posh Deauville hotel. When they discover this inconvenient truth the shock of recognition soon changes to the realization that they were, after all, meant for each other and they unceremoniously desert their new spouses, Victor and Sybil, to live in sin in Amanda’s Paris pied a terre. (Although, as Elyot helpfully points out, in the eyes of Catholics they are still married.)

Their rekindled marital idyll soon returns to the bickering of old, the bickering turns to screaming, and the screaming turns to physical combat. Enter Victor and Sybil, who have tracked down their errant spouses. Elyot and Amanda have once again decided to go their separate ways, but by the end of Act III, Coward has delightfully turned the tables, with Elyot and Amanda once again reunited in their loving antipathy and Victor and Sybil at each others’ throats. It seems inevitable that they, too, are meant for each other.

Private Lives may have something to say about “patriarchy” and “misogyny,” although I doubt either word crossed Coward’s mind when he was writing this elegant bit of pure entertainment. Deep down in its private life Private Lives is as light and airy as the profiteroles served in that posh French hotel. It reminds me somewhat of Oscar Wilde in its insistence on the importance of not being earnest.

Of course, it is now hard to pass a day without hearing the words patriarchy or misogyny at least once and some of the current zeitgeist inevitably finds its way into Perloff’s production. It is doubtful Noel Coward, who played Elyot in the original production, delivered the line “I’d like to chop off your head with a meat axe” with the venom Wyn Davies summons up. But then we live in coarser times.

So, yes, this is not your parent’s or grandparent’s Private Lives, but it will do quite nicely for our 2019 reality. Curmudgeons may grumble that some of Coward’s lighter than air wit has been lost or that the leads are too old for their parts or that the sets (by Ken MacDonald) are not Deco enough, or that color-blind casting has no place in Coward. To them I say simply, “Don’t quibble, Sybil.” Sit back and enjoy.

If Geraint Wyn Davies is too old for Elyot (Coward was 32 when he played it; Wyn Davies is 30 years older) it can be said that, first, he does not look his age and second neither the actors nor the director have tried to fool us into thinking that Elyot and Amanda are thirtysomethings. If anything, Wyn Davies and Peacock add a note of poignancy that would have been absent if younger players had taken the parts.

Wyn Davies seems to have taken his cue from Elyot’s line that we should all live our lives like overgrown babies and it works beautifully. When he plays the coquette with Amanda he does so with the sly acknowledgement that he must look slightly ridiculous at his age and, as always, his timing is impeccable.

Lucy Peacock, whose age chivalry prevents me from mentioning, is a perfect foil for Wyn Davies and a gifted comedienne in her own right. Her series of reactions when she spots Elyot in the mirror of her compact is a master class in comic acting.

As the new and soon to be discarded spouses Mike Shara and Sophia Walker are delightful. Shara, who has been away from the Stratford Festival far too long, is especially effective as the prim and proper British gent who has fallen for and seeks to “protect” his older wife.

Perloff has directed with a light hand, that is to say deftly. She wisely allows her actors to play to their strengths and has resisted any temptation to lard on “social significance” where none is intended.Private Lives is one of the highlights of what has so far proven to be an uneven Stratford season. By all means add it to your list of must-sees.