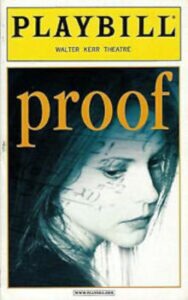 Proof, David Auburn‘s new play at the Manhattan Theatre Club, has parlayed a thin veneer of intellectualism and political correctness into a string of glowing reviews, but on closer examination, this Proof is less than conclusive.

At curtain’s rise, Catherine (Mary-Louise Parker) is carrying on a conversation with her recently-deceased father (Larry Bryggman), a once-brilliant University of Chicago mathematician who had descended into madness in his final years. In the wake of her father’s death, Catherine’s world is in upheaval. Her long absent sister (Joanna Day) arrives to sell the house and whisk Catherine away to New York and Hal (Ben Shenkman) a devoted acolyte of her father’s arrives to pore through the dead man’s lunatic journals in search of mathematical gold. With Hal comes a faint breath of romance for Catherine, who seems to have long gone without while caring for her batty old man.

Catherine presents Ben with a notebook containing, at least so we are told, a brilliant proof of a famous but unidentified mathematical conundrum that has eluded the sharpest mathematical minds for generations. All is exultation until Catherine announces that she, not her dotty dad, is the author. Shocked silence. First act curtain.

So much for plot. Aside from a few jokes about a rock band of math nerds and the drinking habits of theoretical physicists, there is precious little of the intellectual aura that has given Proof its buzz on the Rialto. The proof of the title remains a McGuffin, Alfred Hitchcock’s term for an essentially meaningless device that serves to propel the plot forward. We never learn what the proof is, nor do we have the perverse pleasure of trying to pit our puny brains against ideas too huge for us to grasp. We learn nothing of the inner workings of the mathematical mind and the special joys and challenges of working in a realm that few people can even begin to comprehend are never dramatized, except perhaps to suggest that math drives you nuts.

In fact, Proof is rather old-fashioned in its concerns and plotting and at that level it, alas, falls short. Of the major questions raised — Did Catherine, a mere girl, really write the proof? Is she really going mad like her father? Will she and Hal ever get it on? — only the first is resolved, and that in decidedly undramatic fashion. After a few days of offstage conferring with fellow math nerds, Hal returns to announce that the proof is too “hip” to have been written by Catherine’s dad. Ho-hum.

Proof is not without its merits. Auburn writes well and has created believable characters and some nicely turned dialog. Director Daniel Sullivan (ably assisted by John Lee Beatty‘s smashing set) has turned a quartet of able performers into a finely tuned ensemble. Best of all, to my taste, is Ben Shenkman as the nerdy-suitor. Mary-Louise Parker seems to have been raised in the San Fernando Valley section of Chicago and she is perhaps a bit too drop-dead gorgeous for the role, but she manages the tricky task of being a believable focus for the play’s mock momentousness.

Unfortunately a way with words, stylish direction, and knowing performances do not always add up to a satisfying evening in the theater. Q.E.D.