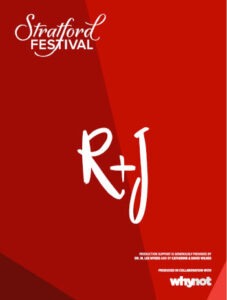 R+J, which I streamed on [email protected], is a gloss on Shakespeare, the initials indicating, I assume, that what we are going to see is not the Bard’s beloved play Romeo and Juliet but something altogether new. As this short but nonetheless interminable production wore on, I decided that the R+J stood for Ravi + Jain, the adaptor director of the piece.

In a programme note, Jain expresses his disdain for audiences that come to classics like Romeo and Juliet expecting to see, as he puts it, “a Xerox copy of what they remember.” Jain sets out to put an end to all that rubbish and, by Jove, he succeeds.

What he sees as his obligation to those coming to the show with no prior knowledge of the source material he doesn’t say.

R+J is presented as the after-the-fact recollections of Friar Lawrence. I know this not because of any dramaturgical mojo on my part but because Jain spells it out in that programme note. Otherwise, I would have been clueless. Father Lawrence, those familiar with the text will recall, marries Romeo and Juliet but also, tragically, supplies the potions that kill them. It’s an interesting perspective to adopt.

The production is also noteworthy in that it is conceived for the sightless and the vision impaired. Indeed, Friar Lawrence is played by Alex Bulmer, a blind actor of considerable skill. Her rendition of the Friar is one of the production’s high points.

With the blind and partially-sighted in mind, the play begins with the cast introducing themselves, describing their ethnicity (cis-gender white male, Asian, skin the color of a Tim Horton’s double-double), and the clothes they are wearing. It’s a lovely touch, so much so that it pains me to have to say that what follows is pretty much dreadful.

Since Jain has conceived the play as a memory piece taking place in the Friar’s mind, crucial plot points are rendered by audio recordings that, at least in the filmed version, are difficult to understand.

True to his word, Jain prevents us from seeing a Xerox copy of what we remember. In his program note he says “Our cast is a formidable group of actors who bear no resemblance to that of any previous Stratford production of Romeo and Juliet – or, frankly, any production at the Festival in its esteemed history.” Truer words were never spoken and Jain makes some bold choices above and beyond the racial diversity that is de rigeur these days.

Perhaps most startling is his casting of a Juliet (the petite Eponine Lee) who was actually fourteen when the play was presented and a twenty-something Romeo (Dante Jemmott). I’m not sure what Canada’s statutory rape laws are, but the combination was, shall we say, bracing.

Beck Lloyd made a perfectly fine Lady Capulet, but Tom Rooney’s Nurse was a puzzlement. Tom Rooney, being Tom Rooney, gave a note-perfect reading of the role, despite making not the slightest attempt to convince us he was a woman. What was the point except to épater la bourgeoisie?

Some things work quite nicely. Lee and Jemmott do well by the so-called “balcony scene,” despite the fact that Jain forces Juliet to crawl through a window to begin it. And I suppose we should be grateful that much of the text for that scene survives.

But other pages of our Xerox copy are shredded. Queen Mab? Fuggedaboutit! Only a word or two remains.

And so it goes. Occasional apt touches overwhelmed by odd choices and poor diction.

As the Friar says, speaking of plants that hold the promise of cures but that also harbor poisons,
Where the worser is predominant,
Full soon the canker death eats up that plant.

Increasingly, the Stratford Festival is presenting “adaptations” of Shakespeare plays (not to mention whatever you would label R+J) that presuppose a deep familiarity with the original text. How else could one understand/appreciate/interrogate something like R+J? What responsibility does the Festival, or any theatrical entity producing plays that bear the brand name of ”Shakespeare,” owe to those who are seeing “Shakespeare” for the first time? Or are productions of  “Shakespeare”and other “classic” texts to be solely the province of theatre nerds speaking to other theatre nerds?

Screening R+J completes my quest to see the season I was forced to miss. (The Rez Sisters, alas, was withdrawn from [email protected] before I got to it.)

On balance, although I enjoyed or at least respected some of the shows, I find myself just as glad that Covid and a vigilant Canadian health service prevented me from piercing the Poutine Curtain in 2021.

Footnote: Next season, The Shaw Festival will present The Mahabharata, written by Ravi Jain. I wonder if we will see the same multi-ethnic casting and the same eagerness to play fast and loose with the source material.