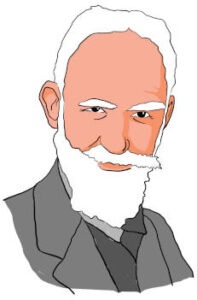 The first four plays of The Shaw Festival’s 2019 season have opened and they’re a mixed bag. Here they are in descending order of my personal preference.

At the risk of the proverbial apples to oranges comparisons, perhaps the best of the bunch is Rope, a 1929 British melodrama by Patrick Hamilton, which is remembered today largely because of Alfred Hitchcock’s 1948 film adaptation. Produced with admirable fidelity to the period, it is perfectly at home in the cozy Royal George theatre.

Rope is an almost unbelievably dated and creaky vehicle, one of many that once filled stages in the English-speaking world, but a game cast under the taut direction of director Jani Lauzon avoids all the pitfalls and delivers an enjoyable evening’s entertainment.

The scene is a Mayfair flat occupied by two Oxford undergraduates who have just murdered the son of one of their professors and stashed his corpse in a chest in their living room. Now they are about to host a dinner party whose guests include their victim’s father.

Why? Oh, the usual Nietzschean enthusiasm that infects privileged college students. (See also Crime and Punishment, and Leopold and Loeb.) In 1929, the material was no doubt considered ever so transgressive, before the term was invented. Then it was put across with large slatherings of melodramatic excess as evidenced by the photographs from the original production in the Shaw program.

Lauzon allows none of that and the performances, while heightened just enough to let us know that we should not take all this too, too seriously, never lapse into caricature.

Kelly Wong and Travis Seetoo are excellent as the perps, but the show belongs to Michael Therriault as one of the boys’ former teachers, whose whimsical façade masks a keen analytical mind. Therriault is a gifted performer who frequently suffers the misfortune of being miscast at Shaw. It’s nice to see him in a role that he can fully inhabit.

The Horse and His Boy

Like the Stratford Festival, Shaw likes to include at least one show each season that will appeal to children. These aren’t throwaway productions either, but often lavish extravaganzas that have no doubt been responsible for creating more than a few life-long theatre-going habits.

At Shaw, under artistic director Tim Carroll’s leadership, this mission to “hook’em while they’re young” has recently taken the form of adaptations of C.S. Lewis’ Narnia novels. This season’s The Horse and His Boy (following last year’s The Magician’s Nephew) is the latest installment and it’s an utter delight.

C.S. Lewis is famous as a Christian apologist and the Narnia tales preach the Christian message in the guise of children’s fantasy. I confess that I found the mythology of this adaptation a little fuzzy to follow, but then I find Christian mythology itself rather befuddling. What requires no explication are the themes and tropes that have characterized this sort of story since Homer first started improvising. And here they are well served by all concerned.

Anna Chatterton, whose play “Within The Glass” is destined to become a modern Canadian classic, has provided a sprightly adaptation with the by now de rigueur nods to current feminist orthodoxy. Christine Brubaker’s brisk direction keeps the action moving and uses every inch of Jennifer Goodman’s imaginative sets and costumes and the Festival Theatre’s large stage. It also helps that the juvenile leads, Madelyn Kriese and Matt Nethersole are altogether delightful.

In drama schools, young actors often have exercises in which they pretend to be wild animals; most of them are all too eager to put such childish things behind them as they seek their fortunes on the wicked stage. So it’s a pleasure to see talented performers, some of them well into middle age, unselfconsciously return to their roots.

The big, blowout musical of the season is getting a lavish production on the Festival stage thanks to Pam Johnson’s set, Kevin Lamotte’s lighting, and Corwin Ferguson’s ingenious projections. If you have fond memories of Brigadoon and its music, you won’t be disappointed.

Matt Nethersole as Charlie and Travis Seetoo as Harry Beaton reveal themselves to be accomplished dancers and Alexis Gordon, late of the Stratford Festival, brings her lyrical soprano voice to the role of Fiona.

The two Americans who stumble on this highland Shangri-la are both excellent. George Krissa as Tommy Albright will be unrecognizable to those who saw him as Rocky in last season’s Rocky Horror Show at Stratford, and Mike Nadajewski, another Stratford stalwart, is terrific as his sidekick; he’s rapidly becoming Canada’s answer to Alan Alda.

Lest you think that you will be seeing a faithful revival of the 1947 original, allow me to disabuse you of that notion. It seems that no company can touch a “classic” these days without mucking about with it in some way. Here the changes (the “revised book” is credited to Brian Hill) make no big difference. Mr. Lundie becomes Mistress Lundie; no one will complain about that except perhaps for the male company member who will grumble over his beer, “I shoulda been playing that part!” More consequentially, to my way of thinking, the witches who served the fairy-tale nature of the story so well have been replaced by genocidal British troops.

As I say, no lasting harm is caused by these changes but still, shouldn’t a preeminent “classical” repertory company have more reverence for the original text?

If you are looking for a good reason for mucking about with the original text of a classic, you’ll find it in George Bernard Shaw’s Getting Married, which graces the Royal George. For starters you could cut out half an hour.

The play is (rightly) considered minor Shaw and is seldom produced, although this is the Shaw Festival’s fifth try. What is that old saying about doing the same thing over and over expecting different results? Now that the “original mandate” has been thrown out the window there seems to be little cause for reviving plays best forgotten.

The play is a potpourri of pithy points on the subject of marriage and divorce and is about as effective as that last bit of alliteration. Shaw seems to have started with a laundry list of ideas and then couldn’t bring himself to throw any of them out.

Tanja Jacobs’ rudderless direction doesn’t help. Seasoned Shavian performers are left hanging as the arguments run into and over each other and the tone shifts bewilderingly. Mrs. Collins’ scene in Act II, although nicely played by the always alluring Marla McLean, seemed like something from another play.

The production did such a poor job of holding my attention that I found myself pondering the use of regional accents at Shaw. Most of the Shaw plays I can remember seeing here (there may be exceptions) use standard Canadian accents, as does The Horse and His Boy, but Rope employs plummy Oxbridge accents and Brigadoon uses various simulations of Scottish brogues. I wonder how these decisions get made.

All in all, this first round of plays provided a rewarding weekend of cramming in four shows. The Grill on King once again fed us well and the bar at the Prince of Wales Hotel provides just the right atmosphere for those long post-theatre discussions.