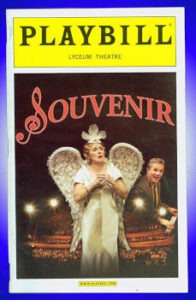 Florence Foster Jenkins succeeded (if that’s the right word) because she was bad. Monumentally, overwhelmingly, never-been-equaled-before-or-since bad. Fortunately, Souvenir, the bittersweet new Broadway comedy at the Lyceum that celebrates her life, succeeds because it is very good indeed.

Florence was a wealthy society widow who regaled New York society in the 1930s and 40s with private benefit recitals in which she savaged the soprano repertoire of the great operatic composers. Believing she was blessed with perfect pitch and possessed “the true coloratura,” she was in fact a spectacularly self-deluded naïf who greatest gift was her sense of self-worth and her unwavering love for the beautiful music she heard in her head.

Word of her “special gift” spread and an eager public would not be denied. Her recitals became one of Gotham’s hottest tickets and, in 1944, her career culminated in a sold out concert at Carnegie Hall, from which thousands were turned away. A month later she died, apparently still not aware that her audiences were weeping from laughter not emotion.

Resurrecting Florence in Souvenir would seem at first blush a one-joke (not to mention rather cruel) exercise that would quickly wear out its welcome. Instead, playwright Stephen Temperley, ably abetted by a first-rate cast and the flawless direction of Vivian Matalon, has created a touching portrait of a very special relationship that will, I suspect, bring a tear to more than a few eyes.

Souvenir is not so much about Jenkins herself as it is about the bond that developed between her and her long time accompanist, the improbably named Cosme McMoon. The play’s subtitle, “A Fantasia on the Life of Florence Foster Jenkins,” suggests that Temperley has taken liberties with historical fact, but no matter, the tale he tells speaks volumes about trust, friendship, and believing in oneself.

The two are spectacularly mismatched. He is musically accomplished, a serious (if unsuccessful) composer, and possessed of a peculiarly gay blend of self-knowledge and cutting wit. She is a dotty woman of a certain age, a walking caricature of the wealthy Park Avenue matron lampooned in countless films of the era. She is as tone-deaf to personal relationships as she is to music. (“I’m no snob,” she tells Cosme at one point, “Look at how well I get along with you.”) Her devotion to fine music is positively religious and her self-delusion is total.

The improbability of their partnership is captured in Coisme’s crack, “People asked ‘Why did she do it?’ I thought the better question was ‘Why did I?'”

And yet, a relationship born of Cosme’s need for a meal ticket blossoms into something very much like love, an arc which Temperley’s script handles quite nicely. In the second act, when Cosme explodes through years of self-restraint and bellows that Florence is a “silly woman,” the sense of horror and betrayal the remark evokes is palpable.

Judy Kaye as Florence will no doubt get the lion’s share of praise for her work in Souvenir, and deservedly so. Her recreation of Jenkin’s off key bleat is uncanny (recordings survive that document Jenkin’s peculiar appeal for the morbidly curious) and one can only marvel at the ability of a truly gifted singer to sing so badly. She also makes Florence a thoroughly loveable eccentric. But special praise is due Donald Corren as Cosme who is the glue that holds the emotional threads of the play together.

His timing is flawless and his complicated feelings toward his benefactress, ranging from horrified disbelief to awed admiration for her monomania to protectiveness of her feelings, are conveyed artfully and economically.

Souvenir ends with a delightfully theatrical device that I won’t reveal. Suffice it to say that it packs a wallop and almost against the odds heightens our admiration for Kaye’s accomplishment.