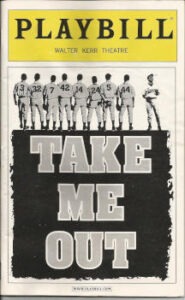 The first thing anyone’s likely to mention about Take Me Out, Richard Greenberg’s new play at the Walter Kerr about a gay major leaguer coming out of the locker — I mean, closet – is the nudity. It’s true. It’s there. There’s lots of it. And, yes, these are some of the best looking male bodies to grace a Broadway stage in a good long while. I actually checked my program to see if there was a credit for “Bodies by Praxiteles.”

But Take Me Out covers a lot more territory than the average “physical culture” magazine and the pleasures it offers are not merely voyeuristic.

At first glance, Take Me Out seems to be about baseball’s (and therefore society’s) ambivalent attitudes towards homosexuality. When Darren Lemming, the studly African-American superstar of the Empires, a team that looks a lot like the Yankees, announces, for no particular reason, that he is gay, the revelation produces a fairly standard array of responses. Most people are accepting, in the currently politically correct manner, but more atavistic feelings seem to lurk just beneath the surface. Lemming’s money management team, in what seems to be an effort to both curry favor and avoid having the straight managers at the firm labeled as gay, assigns him a gay accountant.

When the Empires summon Shane Mungit, a monosyllabic hillbilly relief pitcher from their Triple-A team, things get more interesting. Mungit gives a press interview in which he blithely refers to the coons, spics and faggots he must now associate with. Shades of John Rocker! Predictable havoc ensues and things become progressively melodramatic.

Paradoxically, Take Me Out winds up generating more sympathy for the dense as a doorpost Shane than it does for Darrell, who quite obviously needs no protection. In one hilarious moment, we see Shane struggle (and fail) to understand why is okay to say “people of color” but totally unacceptable to say “colored people.”

Ultimately though, the play has little new to say about the acceptance of homosexuality either in the big leagues or society at large. For one thing, Lemming himself is too much of a cipher to be much of a standard bearer for gay pride. When he is asked what he is passionate about, he can’t provide an answer. Not even baseball seems that important to him. He keeps saying he is going to walk away from it all at the height of his career.

Whatever Greenberg wanted to say about homophobia in sports or racism in society, he winds up telling us much more, and much more persuasively, about baseball itself.

One of Greenberg’s best creations is Mason Marzac, the gay accountant who knows nothing about baseball until he becomes Darren’s account exec. At first he is as smitten with Darren as any school girl with a pop star, but as he immerses himself in the game he becomes a rhapsodic convert to its ability to transport the fan to a heightened level of reality. Indeed, it is Mason’s joyous discovery that baseball “takes me out of myself” that gives the play its title.

Mason’s speeches about baseball are lyrical, even profound. I suspect they will be quoted often among aficionados of the sport. Mason is also quite funny and Greenberg has blessed him with some of the play’s best lines. Denis O’Hare plays the role to the hilt and if he doesn’t snag a Tony nomination I’ll eat my Yankee’s cap.

Greenberg uses a loose structure that relies heavily on to-the-audience narration to provide exposition and move the plot forward. It’s a lazy type of dramaturgy that I object to on principle, but gradually I was able to put aside my grumpy reservations and enjoy the play for what it is. For one thing, Greenberg writes very well. Many of the purely dramatic scenes are electrifying and the play’s many laughs are all earned.

Director Joe Mantello has done an excellent job of finding guys with Greek-god bodies who can really act. In addition to O’Hare’s Tony caliber contribution, good work comes from Daniel Sunjata as Darren, Frederick Weller as the almost feral Shane Mungit, and Neal Huff, as Kippy Sunderstrom, Darren’s intellectual teammate who handles most of the narration chores.