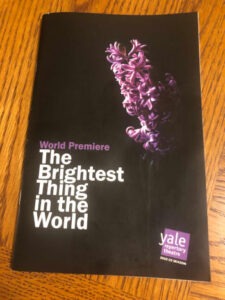 The Brightest Thing In The World At Yale Rep

Eventually, love blossoms when Steph impulsively kisses Lane and then shamefacedly asks “Was that okay?” To which Lane responds, “Shut up,” and we’re off to the races.

They get a room, as the saying goes, and the set erupts with the sound of fireworks and projected explosions. Again, nicely staged by Bordelon, with help from lighting designer Graham Zellers and sound designer Emily Duncan Wilson.
Even though it’s as hackneyed and clichéd as can be, we still enjoy it. Much as we do repeated orgasms.

So far so good and so rom-com.

But The Brightest Thing in the World has far more serious fish to fry. Both women have backstories that would make a soap opera writer drool. Lane suffers from chronic pain, which as we now know (thank you, Dopesick), can lead to drug dependency and addiction. Daunted by the high cost of her attempts to relieve her constant suffering she turned to heroin as a cheaper alternative. She is four years sober when she opens up to Steph but, again as we all know from watching too much television (if not from actual experience), relapse is an ever-present danger. Three guesses.

For her part, Steph is an unwed mother thanks to a one-night stand fourteen years ago. Worse, her daughter lives with her parents, who have disowned her. While she occasionally sees her, her daughter considers her grandparents her real parents. As a result Steph spends every Christmas alone, crying. She is, shall we say, fragile.

While both Steph and Lane genuinely make an effort and while Della does yeoman service in support, things do not turn out well.

The Yale Rep, which commissioned this world premiere, is giving The Brightest Thing in the World a first-rate production. Still, I couldn’t help feeling the piece isn’t ready for prime time.

Playwright Winkler can obviously create characters that spring readily to life in competent hands and she has a knack for dialog and a terrific sense of humor. However, the play tends to ramble, despite it intermission-less hour-and-forty-minute running time. And unfortunately, she has not come up with a satisfactory ending.

The cast is exemplary. Indeed, one of the major reasons for seeing The Brightest Thing in the World is the performance of Katherine Romans, who portrays the doomed Lane. A 2019 graduate of ACT’s MFA program with just a handful of credits to her name, she is a gifted young actress from whom I suspect we will see great things.

Director Bordelon has done an excellent job of bringing The Brightest Thing in the World to life and papering over its weak spots, including finding ways to stage the occasional surreal moments Winkler summons up, without making them seem ridiculous, which I fear they might have in lesser hands.

Set designer Cat Raynor, a fourth-year student at the Yale (never say Geffen) Drama School, has created sets that nimbly carry us from scene to scene; she, too, seems to be looking forward to a distinguished career. Travis Chinick’s costumes, especially for Della, struck me as spot on. And I have already given a nod to Graham Zellers’ lighting, which was effective throughout.

Footnote: As noted, The Brightest Thing in the World is a commission. I am profoundly ignorant of the inner workings of institutions like the Yale Rep, but I have become increasingly curious about the “commissioning” process. First of all, why? Is it a matter of avoiding having to read a lot of plays, most of which will be dreadful? What happened to playwrights scribbling away in their garrets, without the pressure of a deadline, then peddling their perfected wares on the open market?

And if you have commissioned a piece, must you produce it? Even if it sucks? I think of Field Guide, which the Rep commissioned in those halcyon pre-pandemic days and which was, indeed, dreadful.

Had The Brightest Thing in the World been the work of a Yale Drama (never say Geffen) School student, or even the work of newly emerging playwright, I would have confidently said, “Leah Nanako Winkler shows promise!” In fact, I say that now.

The Brightest Thing in the World continues through December 17, 2022. For more information, visit yalerep.org. Masks are mandatory.