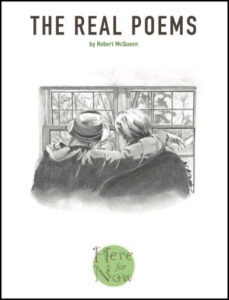 The Real Poems at Here For Now

With its closing production of Robert McQueen’s beautifully written, magnificently performed, and quietly devastating The Real Poems, Here For Now Theatre once again establishes itself as a theatrical company that, despite vast differences in scale and resources, is every bit the equal of the Stratford Festival just up the street, frequently its better.

The 90-minute The Real Poems is an autobiographical elegy to the AIDS era that devastated the theatre communities of New York, Vancouver, and Toronto, of which McQueen was very much a part. With wit, biting humour, and immense skill McQueen reminds us that what may seem like ancient history to some still resonates in the very viscera of those who lived through it. Attention must be paid.

The Real Poems (the play takes its title from Walt Whitman’s “Spontaneous Me” is not quite a one-man show. Composer Laura Burton provides an on-stage soundtrack with piano and percussion that becomes as much a character as the many that McQueen brings to life as he tells his tale.

Young, gay, and eager, McQueen moved from Vancouver to New York to pursue training as an actor and, like so many who made that journey, was smitten by that very special place. “Such interesting people live on Christopher Street” as the song has it.

McQueen and I seemed to have laboured in some of the same vineyards in the seventies and his evocation of New York in that era struck me as spot on, right down to the spectacle of struggling actors passing canapés to the clueless rich at private parties.

Of course, for those of that generation, the great joy of embracing the theatrical life was overshadowed by a tragedy that rivaled any that the great playwrights could have imagined. Horrified, McQueen returned to Vancouver, but the plague followed him there and thence to Toronto, where he watched a succession of friends and acquaintances die tortured and often lonely deaths, abandoned, even vilified, by their families.

I was struck, as I have been so often in stories of that era, both in fiction and non-fiction, by the role played by straight women — as friends, support systems, champions, and caregivers. How fitting, then, that The Real Poems is being presented by a company founded and guided by women and devoted primarily to stories about women’s experiences.

Every aspect of The Real Poems, simple as it is, is exemplary, starting with McQueen himself. He is an actor of prodigious ability. His face is open, even pixieish at times, and yet capable of expressing a wide range of emotions. Perhaps a good deal of the credit for his exceptional performance should be given to co-directors Damien Atkins (whom I remember fondly from Slings and Arrows and The Ladykillers at Shaw) and Andrew Kushnir.

At one point, McQueen raised the blinds of the large window that serves as the back wall of Here For Now’s humble space. As he turned to the audience, the tree outside shimmered in the wind as a squirrel scampered along its branches. It was what the Japanese might call “borrowed scenery” and it struck me as an exemplar of the kind of theatrical imagination that has made Here For Now so special this season.

Stephen Degenstein, who has designed lights for all of Here For Now’s productions this season, outdoes himself with The Real Poems. Even at a matinee performance, with natural light pouring in through a large window, he managed to nicely frame each step of McQueen’s emotional journey.

The Real Poems is not an easy play to watch, but like all great theatre it has a remarkably cathartic effect. Following Whitman’s lead, McQueen tells us that poems are merely pictures, that the real poems are people.

The poems of the privacy of the night, and of men like me,
This poem drooping shy and unseen that I always carry, and that all men carry,
(Know once for all, avow’d on purpose, wherever are men like me, are our lusty lurking masculine poems.)

The Real Poems ends with a litany of names, names of the dead, names of men McQueen was happy with. That simple recitation becomes poetry of the highest order and remarkably moving.

If you are within striking distance of Stratford, by all means make an effort to see this stunning piece of theatre. The Real Poems runs through September 11, 2022. For more information, visit the Here For Now website.

Footnote: At the moment, Here For Now doesn’t know where it will be performing next season. Indeed, there is some uncertainty whether they will be able to perform at all, affordable performance spaces being hard to come by. If you cannot see this show, you can almost certainly write a cheque.