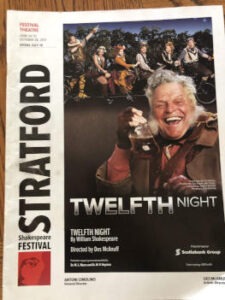 Des McAnuff is a wildly inventive director and much, perhaps too much, of that inventiveness is on display in his production Twelfth Night, which is wowing Stratford Shakespeare Festival audiences at the Festival Theatre.

Set against the backdrop of an enormous smashed mirror, McAnuff’s delirious Illyria is home to a mismatched menagerie of types and tropes that seem to have been stitched together from several plays and periods. By switching the first two scenes of the play, McAnuff seems to be alerting us from the beginning that this will not be your father’s Twelfth Night.

McAnuff’s best conceit is the rock score, which he co-wrote with Michael Roth. Shakespeare’s verse (and some  by Christopher Marlowe) is set to a rock beat and the rock n roll theme is reflected (that mirror, again) in minor characters that look suspiciously like Roy Orbison, Buddy Holly, and John Lennon in his white-suited bearded weirdo phase. It works beautifully, with Ben Carlson as Feste (and altogether delightful) fronting a talented group of musicians.

Tom Rooney’s Malvolio is a minor masterpiece of psychological realism, a choice that encourages us to examine this perhaps too familiar character anew. Less successful although never less than delightful company are Sir Toby Belch (Brian Dennehy) and Sir Andrew Aguecheek (Stephen Ouimette) who seem to have stepped out of a thirties movie comedy. It must be said, however, that Ouimette can do more with a tossed away line than most actors can manage in an entire scene.

As the benighted lovers, Andrea Runge (Viola), Sara Topham (Olivia) and Mike Shara (Orsino) acquit themselves admirably. The look of abject adoration that crosses Topham’s face when she gazes on her beloved I’m sure melted more male hearts in the audience than mine. And for once in a Twelfth Night production, Viola and Sebastian actually were believable as twins.

The costumes (by Debra Hanson, who also did the set) are ravishing (for the members of Orsino’s court) and witty (for Sir Toby and company). The men’s frock coats alone must have cost more than some theatre companies spend for an entire season.

All in all, a delightful and sprightly production that belied its three hour length and brought the audience to its feet the night I saw it. And yet, Shakespeare’s play seemed to get lost in all that inventiveness (I mean, what was that flying refrigerator all about?). As impressive as individual elements were when regarded independently, they never seemed to coalesce into a satisfying whole.

Like the shattered mirror that provides McAnuff’s overall metaphor, this production is bright and shiny, sometimes dazzling, and yet ultimately in fragments.