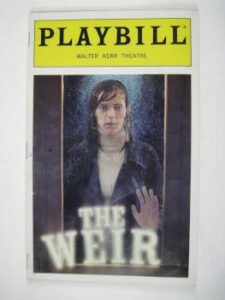 There’s a wee bit o’ magic on Broadway these days, thanks to Ian Rickson‘s masterful staging of Conor McPherson‘s elegiac mood piece, “The Weir.” If you’ve ever wondered what great acting and great directing look like, this is the play to see.

There’s not much to The Weir, really. A small group of fraying-at-the-collar regulars gather in a drab pub in a backwater of Western Ireland. They are joined by a local-boy-made-good who is squiring an attractive newcomer from Dublin. Drinks are poured, old rivalries flare and sputter, tales are told, the changing times are bemoaned, the pub closes. But it is the tales that hold our interest, Irish shaggy dog stories of fairies that grow ever darker and ever spookier and that somehow speak volumes about human loss and longing.

What’s very special is the performances. Most of the actors here seem to be giving the performances of their careers. Jim Norton as the puckish Jack is a wry comic delight. Dermot Crowley as the upwardly mobile Finbar plumbs both the depths and the shallows of his character with equal grace. Kieran Ahern as the plodding Jim wrings pure pathos from that hoary Irish stereotype, the lonely bachelor. The barman Brendan, who spends most of the play just listening and pouring drinks is brought quietly but brilliantly to life by Brendan Coyle. And Michelle Fairley is just right as the delicately pretty Valerie, whose own ghost story knocks everyone for a loop.

Rickson’s direction is nothing short of miraculous. You can almost sense the invisible conductor’s baton tapping out the pauses and swooping down to signal the next change of tempo. In his hands, The Weir is so like a piece of music that it’s hardly surprising that many critics referred to the tales spun during the evening as “arias.”

McPherson has that knack, seemingly endemic among Irish playwrights, of finding the poetry in everyday speech. The language is deceptively colloquial but, despite the frequent repetition of the f-word in its many Celticized variants, the effect is surprisingly lyrical. McPherson does a beautiful job of conjuring the quiet loneliness that lurks within us all, drawing us inexorably toward the “other” that lurks in the dark. The play is also (another Irish trait) very funny in spots, the humor contrasting deliciously with the play’s darker themes.

I have heard The Weir criticized for being “not much of a play” and out of place in a big Broadway house and, truth to tell, there’s something to that. This is not earth-shattering drama and I suspect the lesser productions that will inevitably follow its Broadway success will leave a lot of people wondering what all the fuss was about. And, yes, it would be wonderful to experience it in more intimate surroundings. But a small diamond (or should I say emerald?) in a too-large setting is a gem nonetheless.

Anyone with a deep and abiding love of the actor’s art and an appreciation for fine direction, will find much to admire in The Weir. I’ve seen it three times, paid full price each time, and am ready to go again.