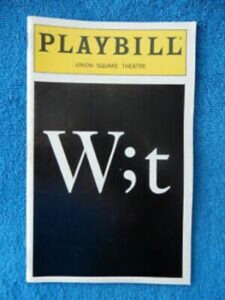 Wit, Margaret Edson‘s Pultizer prize-winning study of an ice-cold intellectual ravaged by advanced ovarian cancer has moved from its funky origins in Chelsea’s warehouse district to the trendy environs of the Village’s Union Square. And with a new cast it is better than ever.

Actually, I was one of the few dissenting voices on the original production. I felt that the central character’s empty personal life was never dealt with dramatically and left a hollow space where the play’s heart should have been. On top of that, the key roles were played too much on one note for my taste, emphasizing the intellectual rigor of the piece but sacrificing the human connection that would make us care for the people on stage.

Now however, new players in some key roles are bringing more colors and more ambiguity to their characters making them much more human and the play itself truly moving.

It’s hard to recommend an unsparing, intermission-less examination of the inevitable decline and agonizing death of a cancer patient as a fun evening in the theater, but Wit brings with it some of the catharsis that got the Greeks writing plays in the first place. Dr. Vivian Bearing, an eminent Donne scholar, has been diagnosed with advanced Stage Four metastatic ovarian cancer. Narrating her own tale, she reminds us that there is no Stage Five. The ending is never in doubt and, to the production’s great credit, the journey is harrowing.

Edson’s conceit in Wit is to contrast the intellectual rigor and struggle for life’s meaning in John Donne’s metaphysical poetry (he’s the Elizabethan-era “Death be not proud” guy for those who have misplaced their Cliff Notes) with the seemingly pointless existence of the hard-driving Dr. Bearing, who has a barely disguised contempt for her students. It’s hard not to notice that the medical establishment has scant human interest in Dr. Bearing either, except as a terrific opportunity to experiment with a brutal new regimen of treatment. As you sow…

Edson raises some interesting issues but raising them, alas, is not quite the same as achieving a dramatic resolution. In the end, Dr. Bearing seems unchanged spiritually, her suffering yielding no insight. Edson, a teacher herself, does better with the poetry explication (in the form of flashbacks to Bearing’s lectures), which is exceptionally well done.

What’s noteworthy in the new incarnation of the play is the humanity brought to Bearing by Judith Light, probably best known for her sitcom role in Who’s The Boss? She’s every bit the intellectual tyrant, wielding the kind of scathing irony that can lacerate. But as her disease progresses, we can see the fear and bewilderment that her predecessor in the role hid too well. This performance made me care for Bearing in ways I didn’t think possible. Now the scene late in the play when Bearing is comforted by her old mentor (played with ethereal simplicity by Sally Parrish) is truly heartbreaking.

Also adding welcome leavening is Grant Show as the young researcher (and one time student of Bearing’s). His Dr. Posner is still totally lacking in both bedside manner and human warmth, but he lets us see the total guilelessness of the young twit that let’s us forgive him. Continuing, as Susie, the none-too-bright nurse with the heart of gold, Paula Pizzi turns in another humanizing performance.

The Union Square Theatre is steps away from its namesake, where you’ll find a fun greenmarket on several days of the week. If you’re looking for a splurgy pre- or post-theater dining experience, I recommend Patria at 20th Street and Park Avenue South. It’s “nuevo-Latino” cuisine is a theatrical experience in its own right.