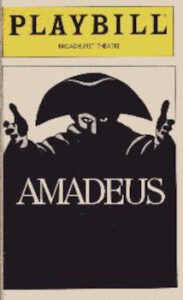 Peter Shaffer’s Amadeus, one of the longest running dramas to ever grace the Broadway stage, is back. But is it better than ever?

The play, as you may recall, is the story of the jealousy Antonio Salieri, the most renowned composer of his age, felt toward that young upstart Wolfgang Amadeus Mozart, whose true genius only Salieri (in Shaffer’s vision) could appreciate. In the end, Salieri became so obsessed with Mozart’s superior artistry that on his death bed he babbled incoherently that he had murdered Mozart more than thirty years earlier. He was mad, of course. Or was he? This is the historical mystery that Shaffer presumes to unravel in his imaginative retelling of the tale. Along the way he engages in a fascinating meditation on the urge to excellence and fame that many of us feel and the mediocrity to which most people — present company excepted, of course — are condemned.

The current production of Amadeus, under the assured direction of Peter Hall, isn’t just another revival, however. Shaffer has reworked the script, subtly but tellingly, to produce a new Amadeus for the millennium.

This Amadeus is a more neatly balanced piece of work. In the original, if memory serves, Salieri was more a villain and Mozart more a twit. The villainy and the twittery are still there, of course, but now with more shading. All in all, the changes make for a a more fully satisfying evening.

Amadeus is still talky, though — it’s nearly three hours with intermission — and despite Shaffer’s clever dialog and his ability to make abstract ideas take form in your mind’s eye, the play remains more an intellectual than emotional experience. This is largely due to Shaffer’s device of casting the entire play as a reverie that occurs in the hours before Salieri’s death with Salieri narrating the action directly to the audience.

On the one hand, this is a convenient (some might say lazy) device that solves all sorts of problems for the playwright. Unfortunately, it also makes it difficult for the audience to enter fully into the emotional lives of the characters on stage since we are constantly being reminded that this is, after all, just a play, the people in it merely phantoms. Of course, an accomplished playwright can make us overlook these faults and Shaffer succeeds to a great extent. Too bad so many lesser playwrights have cheapened this structural device to the point where it looks a bit shopworn even in the most accomplished of hands.

Whatever the faults of the script may or may not be, there’s no denying the fact that Shaffer has written two incredibly flashy roles for actors and David Suchet as Salieri and Michael Sheen as Mozart make the most of the opportunities.

For those who know him only as the prissy Hercule Poirot of the PBS television series Suchet’s Salieri will be a revelation. He is sleek, graceful and, in spite of his character’s protestations to the contrary, rather sexy. His vocal technique is quite simply dazzling as he slides from decrepit old age to the vigor of his younger days. This is a supremely assured performance that serves its intellectual demands well while adding as much emotion as the part allows.

The showier, but more problematic, part is Mozart and here newcomer Michael Sheen shines. He makes us understand why the hyperkinetically coarse young Mozart was such a turnoff to ever-so-sophisticated Viennese society but he also shows us a basic childlike goodness beneath and the artist’s commitment to the truth that lies in beauty. As he ages and his fortunes and health crumble, Sheen undergoes a marvelous transformation, creating a truly tragic Mozart. If Shaffer’s narrative devices didn’t constantly get in the way, it might reduce us to tears.

At the moment, “Amadeus” is the classiest show on Broadway, which may be to relegate it to a somewhat underpopulated ghetto. Those who don’t get upset by plays that make them think and those who appreciate great acting will find much to please them here. Both of the lead performances are good bets for Tony nominations, but my money’s on Sheen. There’s an excellent chance he’ll become one of England’s finest actors. This is your chance to say, “I saw him when.”

But what of the mystery? Did Salieri really murder Mozart? I don’t want to give too much away so all I’ll say is, “Keep your eyes on the cook!”