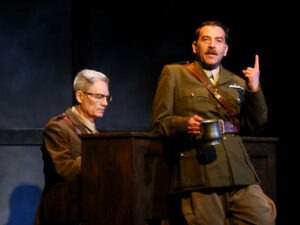 Billy Bishop Goes To War, at Drayton Entertainment’s St. Jacobs Schoolhouse Theatre, tells the stirring story of William Avery “Billy” Bishop, a Canadian World War One air ace and hero. Most of my fellow Americans have probably never heard of him — unless they’ve flown into the Toronto airport named after him. In Canada he’s a big deal. And no wonder. With 72 kills he was the preeminent Allied airman of the war, winning the Victoria Cross, the highest honor the Brits can dole out, along with a slew of lesser citations. Then again, the story of his life is kinda irresistible.

John MacLachlan Gray took the legend and crafted Billy Bishop Goes to War in the late 1970s as a one-man show and a vehicle for the actor Eric Peterson, who collaborated on the script. Bill Bishop Goes To War is often described as a musical, but I would describe it as a play with incidental music composed by Gray. He did a masterful job as many of the songs sound as if they were popular tunes of the era.

Billy Bishop Goes To War has gone on to become one of Canada’s most produced plays, and again no wonder, playing as it does to the pride and patriotism of a country that not only can feel overshadowed by the large country to its south but which also retains a strong sense of allegiance to “the mother country.” It also gives the actor playing Billy an opportunity to turn in a tour de force performance. Thus, I suspect, its perennial appeal.

A self-confessed cheat and liar, Billy Bishop came perilously close to flunking out of his military academy. But when WWI reared its ugly head and the need for cannon fodder … I mean, brave volunteers, became obvious he was appointed an officer in the cavalry. Yes, horses, sent to Mother England to fight a nineteenth century war in the face of twentieth century German machine gun technology.

As an officer, Bishop distinguished himself by continuing to be undistinguished. A series of injuries prevented his being sent overseas for months. Bad luck or clever malingering? Eventually, he found himself in France, suffering more injuries and becoming increasingly disillusioned with life in the mud of battle. The sight of a tiny scout aircraft overhead produced an epiphany and, long story made short, he joined the Royal Flying Corps.

Like many a miscreant before and after him, Billy Bishop had discovered his raison d’être and went on to become a living legend.

All of this and more is related to the audience by a single actor playing not only Billy Bishop, but 17 other characters of various ages, accents, and genders. He is joined on stage by a pianist who accompanies and sometimes joins Billy when he bursts into song and sings a few songs on his own.

Needless to say, Billy Bishop Goes To War requires a star performer with some serious acting chops. Drayton is fortunate to have enlisted the services of Jacob James, an actor blessed with the ability to be instantly charming. I saw him in the Foster Festival’s streaming production of Wildly Romantic (which, alas, I did not review) in which that charm was on ample display. It helps that he is very good looking, with dreamy blue eyes that read perfectly in the intimate confines of the Schoolhouse Theatre. Within moments he has the audience relaxed and content in the knowledge that they are in good hands.

In plays of this sort many people express amazement that an actor can switch personas and accents in a second. I prefer to think that this “amazing” ability is simply part of the job description. Which is not to say that James doesn’t do it extremely well. I especially enjoyed his pompous British officers, whom he serves up in several flavors, each distinct and each a buffoon. He also scores mightily as Lady St. Helier, an upper-crusty London aristocrat who seems to have some connection to Billy’s father and, recognizing Billy’s propaganda value, takes him under her wing and attempts to mold him into some semblance of an exemplar. Laudable, too, is the economy with which he transforms himself into a French chanteuse. It’s Acting 101, or perhaps 401.

I also enjoyed the way playwright Gray portrays how England relied on its “colonials” (and later the even more despised Americans) to save their skins while continuing to hold them in disrepute. I found especially reprehensible the way they pulled Billy Bishop out of combat lest he eclipse the record of Britain’s own air ace. Of course, I’m Irish so I might be a tad biased. By the way, in the week before the Brits shipped him home, Billy Bishop shot down four or five more of “the Hun” to assure his place in history.

I should also tip my hat to Jim Hodgkinson, the piano accompanist and music director, who did yeoman’s service. Max Reimer has directed with just the right touch and Brian Dudkiewicz, who I was pleased to note holds an MFA from Yale, has provided a simple but evocative set on the compact stage of the 100-seat theatre. Some nice costumes, too, from Nicole Del Cul (and I hope they let James keep that smashing leather trench coat!).

At play’s end, an older, wiser Billy Bishop, his chest an extravaganza of gaudy medals, is exhorting a new generation of young men to sacrifice their lives in another war that, had the rationale of the last war borne fruit, wouldn’t be happening. He wonders, briefly, what was the point of the war that brought him so much glory, but he has to admit “It was a helluva time!”

As a veteran myself, I couldn’t help thinking that any old man looking back on his time in the military, whether he was a war hero like Billy Bishop or a malingerer like me, whether he loved it or loathed it, would have to admit it was a “helluva time.”