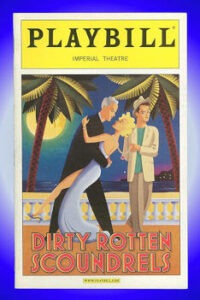 Over the years, I have bemoaned the fate of a number of cheerfully low-brow Broadway musicals that got slammed by New York critics and closed before they could find their audience. So now that Dirty Rotten Scoundrels is a bona fide hit, why am I so unenthused?

Based on the hit movie of the same name, Dirty Rotten Scoundrels tells the tale of Lawrence Jameson, a suave, vaguely English con man (John Lithgow) who, with the aid of a corrupt chief of police (Gregory Jbara), has had an illustrious career bilking rich women like Muriel Eubanks (Joanna Gleason) out of their money on the French Riviera. His idyllic life is thrown into disarray with the appearance of Freddy Benson (Norbert Leo Butz), a distinctly down-market but nonetheless successful American version of Lawrence. When Freddy begs to learn from the master, apprenticeship turns to rivalry and a heartless bet to con the seemingly guileless American Soap Queen, Miss Colgate (Sherie Rene Scott) out of fifty grand.

For starters, David Yazbek has contributed a score that leans heavily to pastiche, parody, and patter songs. It is seldom more than serviceable. As a lyricist, he aspires to be a sort of potty-mouthed Cole Porter and succeeds only intermittently. (Intriguingly, the producers have decided to give away 50,000 copies of the original cast recording CD as a promotional device. Maybe they realized that if they waited for the CD to sell enough copies on its own merits to affect box office sales, they’d be waiting a long time.)

Jeffrey Lane‘s book is filled with the sort of lame “like-a-jokes” that have become standard sitcom fare. A sample:

The script often seems strained and pro forma, nowhere more so than in the romantic subplot (Jbara and Gleason) that here seems as stuck on and misplaced as a wayward tail in a game of pin the tail on the donkey.

On the surface, it would seem that Dirty Rotten Scoundrels has much in common with The Producers and should have much the same appeal. Both, after all, involve a mismatched male team involved in frankly illegal behavior. But where Max and Leo are loveable, Lawrence and Freddy are merely larcenous. To borrow a line from the show, which borrowed it from the film, which, I strongly suspect, stole it from somewhere else: “What they lack in grace, they more than make up for in vulgarity.” Deprived of any real soul, Lawrence and Freddy are forced to fall back on style and schtick.

Which brings me to the two main reasons why Dirty Rotten Scoundrels is worth seeing at all. Norbert Leo Butz is a gifted physical comedian with a solid Broadway resume (Wicked. Rent) who is almost certainly poised for a major breakout into film and television. When called on to be disgustingly gross, he doesn’t hedge his artistic bets. He is, as they like to say in drama school, fully in the moment.

Best of all is John Lithgow, whose range seems to know no bounds. It would seem that Mr. Butz has the showier part, but Mr. Lithgow gets some of the biggest and best-earned laughs in the show with the most economical of hand gestures. It’s a joy to watch a master steal the show.

Now truth be told, John Lithgow is no Cary Grant, but as Lawrence he is constantly reminding us how incredibly handsome he is. It is a hallmark of his art that you buy it hook, line, and sinker.

Also justifying the price of admission is Sherie Rene Scott, who was a commanding Amneris, Queen of Eqypt, in the late, unlamented “Aida.” She has far too little to do here as the deceptively naive Soap Queen, but when she opens her mouth to sing you know instantly you are in the presence of Broadway royalty.

Ms. Scott certainly doesn’t need to be miked in a moderately sized house like the Imperial, but miked she is as is the entire show from beginning to end. Not only is the show miked, but the volume is turned up well past any attempt at verisimilitude. I couldn’t help wondering how long it will be before some bright producer realizes that, since nothing sounds real anymore, it would be simpler just to record the “perfect” performance and lip sync for the rest of the run.

Jack O’Brien, ably abetted by David Rockwell‘s ingenious revolving sets, has directed with the lively pace the material demands, and Jerry Mitchell has provided some nifty choreography in the few places available to him.

Finally, I should note that the sold-out house I saw Dirty Rotten Scoundrels with did not share my curmudgeonly reservations. They leapt to their feet and gave the show the lusty standing ovation they obviously felt it deserved.