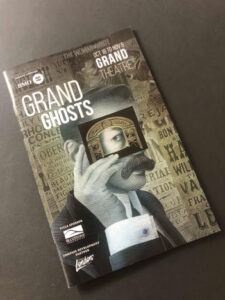 Grand Ghosts at The Grand Theatre

Grand Ghosts, now premiering at the Grand Theatre in London, Ontario, was a grand notion. Too bad it didn’t work out.

The idea behind Grand Ghosts, as I understand it, was to celebrate the reopening of the renovated theatre with a fun frolic of a show about the ghosts said to haunt the 121-year-old theatre, premier among them the shade of Ambrose Small.

Ambrose Small was a self-made theatrical impresario who owned a string of theatres in Ontario and London’s Grand was said to be his favourite. He was by all accounts something of a scoundrel. An inveterate gambler and womanizer, he had a secret room off his office in which he conducted numerous adulterous liaisons. He sold his theatres in 1919 at a $1.7 million dollar profit, chump change these days but at the time an impressive sum. Small might be forgotten today were it not for the fact that after depositing the check, he promptly vanished into thin air, leaving his wealth behind, never to be heard from again.

Today his spectral presence is said to favour a box on house left of the Grand. It’s a cute story, but the problem is Ambrose Small was last seen in Toronto, at the Grand Opera House, another of his holdings and the location of his business office. A confessional letter, signed only “Reuter,” suggested that he was killed and dismembered there, his limbs consigned to the theatre’s furnace and his trunk dumped in Toronto’s Rosedale ravine. The claim that his wraith now hangs out in London seems to rest on the claim of a night watchman that he saw Small enter the Grand in London some weeks after his disappearance.

[An alternate version of this “history” as told by the Grand Theatre can be heard in this episode of “The Girly Ghosthunters.” And, yes, that’s it’s real name.]

The Grand Opera Theatre was demolished in 1924, the site now occupied by a 68-story office tower named Scotia Plaza. Seems to me that if Ambrose Small’s phantom lurks anywhere it should be there, in some accountant’s office or in the precincts of Grand Opera Lane which runs alongside.

In Grand Ghosts, playwright Trina Davies has cobbled together an awkward script that recounts Small’s troubled business and personal relationships and the aftermath of his disappearance. Director Jillian Keiley contributes a lumpy production that struggles mightily to overcome the script’s shortcomings and ultimately fails.

At first it seems we might be in store for something genuinely spooky, but that never materializes. Given the character names (Ghost Acrobat, Ghost Contortionist, Ghost Singing Diva, and so forth) I had hopes that perhaps we’d be treated to some vaudeville-style turns a la Chicago. No luck there either, despite the musical numbers that pepper the show and that don’t add much. A musical comedy this ain’t.

Instead, Davies gives us an “Emcee” whose connection to the theatre was never clear to me. Another Grand ghost, perhaps? He summons the spirit of Ambrose Small and a cast of seven other Grand ghosts who supposedly died within the confines of the theatre. They are assigned roles in which they act out the story of Ambrose’s ill-fated life.

Some very fine actors throw themselves into the effort to breathe some undead life into this endeavour, but with middling success. Jesse Gervais has the unenviable task of portraying not only the real Ambrose Small, but a cartoon version of himself, as well as contributing a bunch of ancillary schtick of Keiley’s devising. That he manages to come through this with his dignity intact is a testament to his acting chops. Andrew Prashad makes an arresting figure as the Emcee and adds some nice tap dancing. Other terrific performers, like Cyrus Lane and Jan Alexandra Smith, were largely wasted.

Keiley and cast conjure the occasional arresting moment. A sequence in which Small’s story is told as a silent movie was clever and entertaining. A bit in which Small’s mistress (Tess Benger) speaks the words of a letter she has written as it is being read first by Small’s business partner and then by his wife was one of the truly funny moments in the play. A trio composed of Jan Alexandra Smith, Tahirih Vejdani, and Tess Benger singing “The World is Waiting for the Sunrise” in tight harmony was quite lovely. Other bits, like a car chase and a horse race fell flat.

The movement (I can’t bring myself to call it choreography) provided by Genny Sermonia was often awkward and tentatively executed. Indeed, much of the production had the uncomfortable air of the first preview of an under-rehearsed show. Shawn Kerwin contributed some clever moveable set pieces that suggested the proscenium of the actual theatre, but they were lost in the vast space of a stage that seemed to be open to the back wall, making the play seem rather under-produced.

Alan Cole, who also served as musical director and composer, unobtrusively tickled the ivories upstage center even as his piano served occasionally as part of the set.

And so Grand Ghosts dutifully told its story. I found it telling that this was one of the few shows I’ve seen this year that did not receive the seemingly mandatory standing ovation.

I had grand expectations for Grand Ghosts. Ah well, you can’t win ’em all.