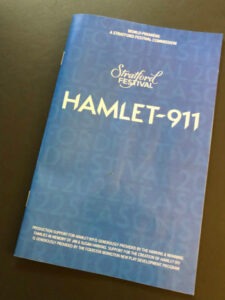 Hamlet-911 at The Stratford Festival

Hamlet-911 is a satiric comedy about white male privilege in the theatre, specifically the Stratford Festival, and the exclusion of women and minorities from its sacred precincts.

No, wait! Hamlet-911 is a heartfelt drama about teen suicide.

No, wait! Maybe it’s just that the playwright and director (Alisa Palmer), who came up with the basic premise of the piece, haven’t really decided where to focus their energies.

Two stories intertwine in Hamlet-911. Guinness Menzies (Mike Shara), the star of the hit TV show “Vampire Dad,” is playing Hamlet at the Stratford Festival, and his father, Rex (Scott Wentworth), a Stratford legend and three-time Hamlet, is playing the ghost of Hamlet’s father. Guinness is wrestling with actorly self-doubt, a flirtation with his Ophelia (Eva Foote), and his suspicious wife Sue (Amelia Sargisson).

Meanwhile, the suicidal 14-year-old Jeremy (Andrew Iles) sends an email to Guinness, hoping to speak with him when his school comes to see Hamlet, even though he knows Guinness doesn’t do talk-backs. He is ignored and begins frequenting suicide chat sites on the Internet, moving ever closer to taking arms against his sea of troubles.

Meanwhile, Guinness and Sue argue after she asks him if he is having an affair and he slaps her, an act which, as played, seems to shock them both speechless. She leaves, he follows on his bike in the rain, only to wipe out and . . .

Well, the 911 part of Hamlet-911 seems to suggest that Guinness is lying dead in the street and has entered a sort of purgatory in which an Indigenous Yorick (Gordon Patrick White) serves as Virgil to his Dante.

With Yorick’s guidance, Guinness gets to revisit crucial moments in his past and most specifically in his recent past; he also witnesses Jeremy’s inexorable slide towards suicide. Eventually, Yorick answers Guinness’ pleas to go home by offering him a choice — return to the moment before the slap or save Jeremy’s life.

Hamlet-911 is “meta” as all get out. MacDonald has borrowed freely, from time-worn theatrical anecdotes (“If you think I’m drunk, wait till you see the Duke of Buckingham”) to tropes straight out of Slings and Arrows, such as an assistant stage manager (Wahsonti:io Kirby) who bursts into tears at the slightest provocation. Rather than set the play in a fictional “New Burbage,” the references to the Stratford Festival are direct, frequent, and more often than not barbed.

Reaching back to a theatrical tradition even older than Shakespeare, MacDonald employs a chorus that fills minor roles and appears periodically singing variations on “Heigh Ho, the Wind and the Rain” from Twelfth Night. Shakespeare himself is quoted liberally, often to great effect: Eva Foote’s rapid-fire rendition of the “to be or not to be” soliloquy is a highlight.

There are plenty of theatre references in Hamlet-911 for us nerds, including the inevitable talk-back question: “How do you memorize all those lines?” There is a hard-working and long-suffering stage manager (Jacklyn Francis) who struggles to keep the juggernaut that is a major Stratford production on an even keel. Truth is spoken to theatrical power when Guinness’ mother (Sarah Dodd) tells him she is too old to play his mother in Hamlet, a role that eventually is filled by Guinness’ wife. And, to MacDonald’s credit she has given Rex Menzies an impassioned speech in which he decries a contemporary theatre filled with “United Nations do-goodery, where everything is unicorns, and rainbows, and hyphens, and pronouns.” It’s positively Shavian.

Director Palmer has used every spare inch of the Studio Theatre’s compact space, including valuable real estate in the audience, the trap, and an opening in the theatre’s upper reaches that I’ve never seen used before. There are multiple projections on hand-held screens that feature, among many other things, Tik-Tok videos created by members of the Stratford company.

So what’s it all about, Alfie? Good question and I don’t have a ready answer. On the one hand, teen (and even younger) suicide is a dreadful thing. No argument there. Indeed, an entire page of the programme is given over to a list of resources that address suicide prevention and the mental health of youth.

But most of the “message” of Hamlet-911 seems to revolve around the current state of theatre in Canada. There things become more problematic, but I think it is fair to say that, muddled though it may be, the fodder the play provides for lengthy after-theatre conversations is a strength rather than a weakness.

Hamlet-911 seems to make Guinness something of a straw man, an avatar of toxic masculinity and white male privilege, set up only to be struck down. Yet he is depicted as the damaged son of a supremely dysfunctional marriage. His major #MeToo crime seems to be a hand that has strayed on stage from waist to tush. Shades of Al Franken! The part is so thinly written that, despite a solid performance by Mike Shara, the placard he is given at play’s end, “I am an asshole,” seems straight out of the Cultural Revolution and a cheap shot. Of course, I confess to being a man, so your mileage may differ.

The play is awash in ironies. The greatest, perhaps, is that Scott Wentworth, cast as the personification of the cis-hetero patriarchy and everything that is wrong with today’s theatre, gives the best performance of the show. Brief as it is, it is a mini master-class in what great classical acting looks like. There will be some current theatrical practitioners who will draw a different conclusion from Wentworth’s performance, but none I dare say, can match his level of expertise.

Another fascinating aspect of Hamlet-911 – and kudos to MacDonald and Palmer for having the guts – is the numerous swipes they take at the Stratford Festival, the proverbial hand that is feeding them. But this begs the question: Why would the Festival agree to brave these particular slings and arrows? It’s true that the Festival allotted a mere 25 performances to this show, but I couldn’t help seeing Artistic Director Antoni Cimolino as Holy Roman Emperor Henry IV standing in the snow at Canossa. I tried to imagine a gay feminist theatre company agreeing to mount a play that cast similar aspersions on its production history and ethos and failed.

At one point, Rex Menzies, venting his spleen towards the woke tendencies of today’s theatre, growls “Get your own Hamlet!” A programme note claims that “Hamlet-911 does just that.” I beg to differ. If Ann-Marie MacDonald writes her own Hamlet it will be a very different play, set in a very different place, with a very different cast of characters. It will simply be seen as a timeless classic that will speak to the universal human experience and echo through the ages.

Perhaps the time will come when MacDonald or another talented female playwright (and Canada has a bunch of them!) will write that play. In the meantime, it’s hard not to view the constant excoriation of the centuries-old work of a dead white male who strove to craft dramatic works at a time when women were not legally allowed to perform on stage, and the inevitable “exclusion” those laws imposed, as an expression of frustration and a tacit admission that Shakespeare is a hard act to follow.

I told you the play provides ample fodder for discussion, preferably over a fine single-malt beverage. So I’ll call a blissful halt to my own pontificating and urge you to see the play and start your own conversations.

There is much to commend in Hamlet-911. I have already mentioned the fine work by Wentworth and Shara. Sara Dodd provides both gravitas and humour as Guinness’ mom and doubles as the voice of Siri on Guinness’ phone. Andrew Iles may be way too old to play a 14-year-old (a case of reverse ageism?), but he scores nonetheless as Jeremy. Eva Foote and Amelia Sargisson are apt as the women in Guinness’ life and Micah Woods is most amusing as Guinness’ understudy who winds up (don’t ask) playing Ophelia. The young chorus, featuring some of the performers from 1939, does itself credit.

Hamlet-911 is a complex show technically and Jung-Hye Kim (sets), Ming Wong (costumes), Leigh Ann Vardy (lights), and Chris Ross-Ewart (composer and sound designer) execute very well indeed. The kaleidoscopic video and projections are credited to HAUI, which I’m guessing is a company although these days you never know.

Director Alisa Palmer, has done a solid job of marshaling all these ingredients into a more or less coherent whole. Palmer, by the way, is in “real life” (as they say in the fanzines) Ann-Marie MacDonald’s wife. And since we’re getting all meta here, what does that say about power dynamics in today’s theatre?

Footnote 1: We are used to getting warnings before we see a play. (“This production contains nudity, smoke effects, loud noises, and iambic pentameter.”) Perhaps it’s time to add warnings to theatre programmes. (“This programme contains statements that will make you say ‘Huh? Wha?’”)

Footnote 2: For some reason, there are no understudies for this production. And so Hamlet-911 had it’s official premiere pushed back several times due to outbreaks of Covid in the cast. It finally opened on September 18. As a result, Hamlet-911 will enjoy just seven official performances by my count before its announced closing on October 2, 2022. I’m sure there are very good reasons, almost certainly fiscal, why Hamlet-911 can’t be extended. This playwright and this production deserve better.