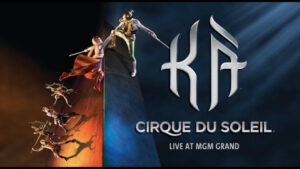 Ka, Cirque du Soleil’s astonishing show at the MGM Grand would be worth seeing simply because it is probably the most elaborate and spectacular theatrical presentation to be mounted since the ancient Romans flooded the Coliseum to stage naval battles. But Ka is much more than a series of amazing technological feats (and the show’s $165 million budget bought a lot of that), making it the must-see Cirque show in Vegas.

Unlike most Cirque shows, which wrap more or less traditional circus acts in a dazzling theatrical package sprinkled with intriguingly offbeat post-modernist touches that hint at deep metaphysical significance, Ka actually tells a simple but timeless story with a beginning, a middle, and an end. The circus acts are there, of course, but they have been very cleverly put at the service of the tale being told.

The story involves the trials of a prince and princess whose idyllic kingdom is attacked by the marauding forces of a rival empire. Their parents killed, they escape into exile on storm tossed seas, are separated, journey to the heart of the evil empire’s darkness, where a mysterious machine powered by human fuel turns stone into explosives, and eventually are reunited and return home to embrace a happier future.

The designers seem to have found inspiration in sources as diverse as Kabuki, Chinese kung-fu, and the Lord of the Rings films, but the end result is totally Cirque and visually stunning. Most astoningly, there is no “stage” as we commonly think of it. When we enter the massive theater (over 1,900 seats and an attraction in itself), we are greeted by an immense black void where a stage would be. Into this emptiness floats a series of platforms that move and tilt in all directions.

At one moment, the platform is a sand-covered beach, until it tilts and the sand and performers slide off into the void. At another, it is a vertical wall on which the good guys flee while evil archers pepper them with arrows that thunk into the surface offering handholds and obstacles. At yet another, the stage area becomes a sort of gigantic thicket of grass in which the performers flit among enormous bugs and snakes.

There are sailing ships and galleys, flying machines powered by humans, and finally that mysterious — and immense — factory churning out gunpowder. There are also some moments in which the Cirque design magicians use relatively simple stage tricks to spectacular effect, making this show a triumph of the imagination as well as technology.

I can’t wait to see it again and if you only have time to see one Cirque du Soleil show in Las Vegas it should probably be this one. I say “probably” only because, after Ka, the others may seem skimpy by comparison.