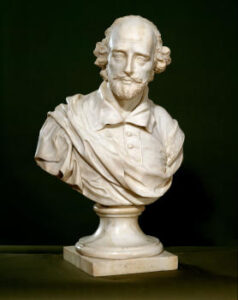 At the Belasco Theatre, New Yorkers are being treated to an all-too-rare opportunity to see William Shakespeare’s Richard III and Twelfth Night performed under the “original practices” rubric favored at the reconstructed Globe Theatre in London.

All costumes are authentically Elizabethan, meaning no zippers, no Velcro, no artificial anything. The sets are period as well; in this case mimicking a university dining hall where Shakespeare’s troupe sometimes performed with a minimum of props and scenery. Some seats are on stage recreating the intimacy of The Globe. And, of course, all the female roles are played by men.

If the historical recreation was all there was to these two productions it would probably be worth the price of admission. Fortunately there is much more on offer.

For starters, there is the chance to see the protean Mark Rylance give two more of his sui generis characterizations. There is also the delicious thrill of seeing a younger, relatively unknown actor, Samuel Barnett, act rings around the putative star.

Great actors like Rylance and great directors like Tim Carroll, who directed both plays, have a “problem” few of us share: They are intimately familiar with the works of the Bard and have seen or been involved in more productions than you and I have had hot breakfasts. So they bring to each new Shakespearean venture a perfectly understandable human desire to put their own stamp on the material. Too often, alas, they forget that their primary responsibility is to the playwright’s intent and the interests of the audience, many of whom are experiencing the text for the first time.

Some of that tendency is on display here, although the original practices format prevents them from excrescences like Nazi regalia in Richard’s court or golfing togs on Sir Toby.

Rylance is the most idiosyncratic of actors and he is never less than riveting to watch, but his Richard seems to presume that every one of us has seen dozens of other productions and is dying to see the part played as no one else has ever done it. His Richard begins as a goofy buffoon and ends as a gibbering madman who approaches Bosworth Field like Sir Andrew Aguecheek.

A case can be made for this interpretation, I suppose, but again it presumes a far greater familiarity with the text than most modern-day theatregoers possess. I doubt the young person approaching Richard for the first time will come away with the understanding that this is one of the most bone-chilling villains ever created.

The downside of his approach is epitomized in the scene in which Richard, having just murdered Queen Elizabeth’s two young boys, makes a case for why she should not on consent to his marrying her daughter but plead his case to the child.

It’s the creepiest scene in the play and Samuel Barnett offers us a fierce Elizabeth who fully earns our sympathy as she faces down the tyrant. But the power of the scene is undercut when Rylance makes us laugh when we should be shuddering in horror. Barnett gives us an idea of what might have been, while Rylance (presumably with the director’s acquiescence) lets the opportunity slip.

Barnett’s artistry is also on display in Twelfth Night in which he plays the cross-dressing Viola to Rylance’s Olivia. Rylance’s interpretation has its insights, particularly in the way he reminds us that Shakespeare wrote a rollicking comedy and here the laughter is well earned. Too often, though, he shades into caricature, a misstep Barnett never makes.

Barnett never once lets us forget that “Caesario” is a woman in disguise and watching her struggle with her growing desire for Count Orsino is as heart-wrenching as it is hilarious. If there’s a Best Actor Tony waiting in the wings for this production, it should go to Barnett.

All carping aside, these two productions offer an embarrassment of riches for the theatergoer. The costumes by Jenny Tiramani are a wonderment and the fact that we get to watch the actors being dressed by able costumers on stage before each show only adds to the enjoyment. Not only that, she provided the splendidly authentic sets as well!

The supporting performances are as good as you’re likely to see in any Shakespearean production. Stephen Fry makes his Broadway debut as Malvolio and to his (and Carroll’s) credit plays it straight. It works beautifully and don’t be too surprised if you find yourself sorry for him at play’s end.

In fact, one of the hallmarks of these productions is that neither director nor actors (Rylance, perhaps, excepted) feel the need to underline or exaggerate in the mistaken belief that, otherwise, no one will understand what’s going on or get the jokes. If you’ve seen too many overblown Sir Tobys and Sir Andrews, the understatement and realism of Angus Wright (Sir Andrew Aguecheek) and Colin Hurley (Toby Belch) will come as a revelation. Rather than diminish the humor, they heighten it.

Paul Chahidi is equally good as Maria, Sir Toby’s eventual bride, and he scores twice in Richard as Hastings and Tyrell. Indeed, everyone in the cast gives good account of himself.

Mention should also be made of the seven-person musical ensemble (they allowed a few women to sneak in here). The music is of the period as are all the instruments and it’s invariably delightful.

And then there’s the dancing. Apparently, every play in Shakespeare’s day ended with the entire cast performing a gavotte, or some similar Elizabethan dance. It’s become something of a hallmark for original practices productions at The Globe and it is altogether marvelous. It makes you realize what a shabby substitute our present day curtain calls are.

If you plan to see both Richard III and Twelfth Night, see Twelfth Night second; you’ll end the experience on a high note. If you can see just one, Twelfth Night is the obvious choice. Regardless of what the box office might tell you, seats on the side of the orchestra, from about the middle of the house down, are obstructed view due to the onstage seating.