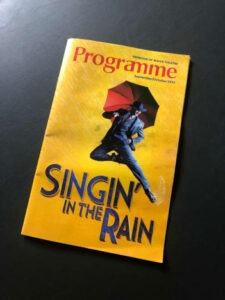 Singin’ In The Rain at The Princess of Wales

No, the Mirvish production of Singin’ in the Rain, currently packing them in at Toronto’s Princess of Wales Theatre does not come close to matching the razzle dazzle of the 1952 MGM screen classic starring Gene Kelly, Donald O’Connor, and Debbie Reynolds. But I don’t think that’s the point.

My guess is that this Singin’ in the Rain, which had its origins at the Chichester Festival in England, followed by a West End run, was the result of a shrewd show-biz calculation by director Jonathan Church. Surely the sheer nostalgia value of the property will ensure a steady stream of punters at the box office and, if we don’t screw it up, good word of mouth.

That’s pretty much what we get in this new, all-British import, in which Sam Lips, Alastair Crosswell, and Charlotte Gooch stand in more or less successfully for their illustrious predecessors. The matinee audience with which I saw the show seemed to love it and the Toronto critics gave the show a gracious reception. I was less impressed.

The production struck me as something you’d expect from the third touring company – highly professional but several steps removed from whatever it was that made the original production a mega-hit. I also couldn’t shake the feeling that I was seeing an early preview rather than a show that has been running successfully for months.

For starters the performance I attended was plagued with a series of technical glitches, none more inexplicable than problems with the miking. (Gareth Owen is credited as sound designer and Matt Peploe as associate.) Frequently, major characters would be on mike, while a minor character standing next to them was all but inaudible. More aggravating was the way in which a character would start talking but the mike wouldn’t kick in until they were half way through the first sentence.

The scene in which Don, Cosmo, and Kathy discuss the disastrous premiere of Dueling Cavalier could barely be heard until the mike finally kicked in just in time for Kathy’s line “If only they could fix the technical problems.” It brought the house down and generated a lengthy round of applause. It was the biggest laugh in the show, by the way, a fact I found telling.

Technical problems aside, the pacing often seemed sluggish and some performances tentative.

If I’m making Singin’ in the Rain sound like a disaster let me hasten to add that these were minor (albeit highly memorable) moments. Overall the show is quite genial and pleasantly enjoyable with some decided high points.

Charlotte Gooch offers a more worldly-wise version of Kathy Selden than you may remember from the Singin’ in the Rain movie. She’s easy on the eyes, a competent hoofer with a lovely singing voice, and (to borrow a line from another libretto) only the stage floor kept her legs from going on forever.

Even better for my money was Faye Tozer who makes her mark as the vocally challenged Lina Lamont. In keeping with the times, Tozer gives us a Lina with a lot more “agency” than we are used to seeing from the dumb-blonde stereotype she is playing.

This Singin’ in the Rain would have been helped enormously by some socko choreography. Alas, Andrew Wright’s choreography leans heavily toward synchronized arm waving and walking about, with a few fleeting flashes of Fosse, pleasant as far as it goes which was not nearly far enough. (Jaye Elster is credited with “additional” choreography.)

For a show in which the studio head barks out “We gotta have tap dancing!” the tapping is disappointing. Only George Lyons rises above the general level of mediocrity; he is accorded a nice featured bit in the “Moses Supposes” number. In fairness, I suppose I should point out that we live in a time in which superb tap skills are no longer the sine qua non of a musical dance corps. Perhaps that explains why the tap choreography is so tepid.

Then, of course, there is the iconic “Singin’ in the Rain” number. The first few bars were greeted with a warm round of recognition applause, underlining the wisdom of director Church’s hunch.

It would be cruel to point out that Lips is no Gene Kelly. Who the hell is? But he has fun with the number and so do we thanks to the production’s signature gimmick. Rain. Real rain. Lots of it. (Audience members sitting close to the stage are given ponchos.)

The Singin’ in the Rain stage (sets and costumes by Simon Higlett) has been designed to form a shallow pool downstage, which quickly fills up as the number progresses, allowing Lips to shower the first few rows as he sweeps his feet through the water. The number makes for a great Act One curtain and is so successful that it is reprised at show’s end with the entire company sloshing gleefully about.

Another thing that impressed me about this retooling was the strength of Betty Comden and Adolph Green’s story. Even without the manifold glories of the film version it still manages to hold our interest.

In sum then, Singin’ in the Rain is an enjoyable night in the theatre. It passes pleasantly enough and has the salutary effect of reminding you to rewatch the film one more time.

I don’t know if the producers are eyeing a Broadway run. The fact that they brought over the entire English company, right down to the props supervisor, suggests that might be the case. If so, as a native New Yorker, I have some advice. Fuggedaboutit!

On the other hand, what do I know about theatre?

Singin’ in the Rain continues at the Princess of Wales through October 23, 2022. For more information, visit the Mirvish website.