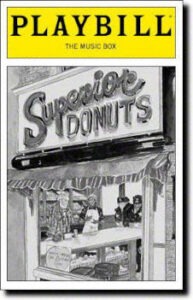 Tracy Letts took Broadway by storm a few seasons back when his sprawling family comedy-drama, “August, Osage County,” got rapturous reviews, won the Tony, and had a healthy run.

Now he’s back at the Music Box with “Superior Donuts” and it’s unlikely that Broadway magic will strike twice.

Arthur Przybyszewski (his unpronounceable name is a running gag) is an aging and lonely child of the sixties running his fading family donut shop in an iffy neighborhood of Chicago. Via rather awkward, to-the-audience, interior monologues, we learn he carries a burden of guilt over long ago decisions and his dead father’s disdain.

Despite a clientele that seemingly consists solely of a neighborhood crazy lady and an attractive buyout offer from the Russian immigrant who runs the electronics store next door, Arthur soldiers on.

Into his recently vandalized shop comes a ball of energy named Franco Wicks, a 21-year-old black kid with a personality a mile wide, who’s after the minimum wage job Arthur has advertised. Franco quickly learns more about Arthur than Arthur is willing to share and Arthur learns that Franco has written the “great American novel,” which in its manuscript form looks to be lengthy.

Arthur and Franco’s growing intimacy becomes the catalyst for a resolution of Arthur’s crisis of the heart and forms the rather predictable and ever so slightly sentimental story line of the play. Neither are attributes that sit well with Gotham’s hard-bitten critical establishment.

That’s too bad because “Superior Donuts” is not without its pleasures and I dare say many audiences would enjoy it every bit as much as the early preview audience with which I saw it. (It got a standing ovation.)

Letts is a talented writer with a flair for clever dialog and the characters he has created here are almost uniformly endearing.

Jon Michael Hill is making a smashing Broadway debut as Franco. The big question is will the show run long enough for it to do him any good? Michael McKean (of Laverne & Shirley and Spinal Tap fame) does a nice job with the nebbishy Arthur.

Also scoring points with the audience are Yasen Peyankov as the Russian entrepreneur and Jane Alderman as the dotty Lady Boyle, who proves that there truly are no small parts.

Director Tina Landau has done a good job of helping her cast bring verisimilitude to Letts’ characters and laughter to his punch lines. Unfortunately, the same can’t be said for a crucial second act fight scene. It’s supposed to be clumsy and almost farcical, as real fist fights are, but it succeeds only in looking fake and interminable. Paging B. H. Barry!

“Superior Donuts” is the kind of worthy but imperfect play that used to get done a lot Off Broadway. Had the producers opened it there, it might have enjoyed a modest run. I hope I’m wrong, but I fear its Broadway tenure will be brief.

For more on Tracy Letts, the actor, click here.