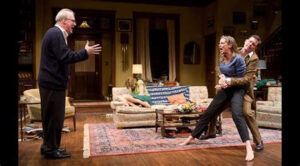 I must confess that I am no great Albee fan. After the early promise of works like Zoo Story and Virginia Woolf, Albee became for me something of a modernist poseur, crafting sleek works of theatrical abstraction that I found rather hollow and often infuriating. Returning to Virginia Woolf, I see now that the descent had already begun.

What the play has going for it, of course, are its protagonists, George and Martha, who let us wallow in the voyeuristic schadenfreude of watching a relationship far more dysfunctional than any of ours could possibly be. Albee certainly knew how to create powerful moments. It is also an opportunity for first-rate actors (if you’re lucky enough to have them) to pull out all the stops and really chew the scenery.

Director Pam Mackinnon is fortunate enough to have Tracy Letts and Amy Morton in the leads. Letts is perhaps best known outside Chicago, Steppenwolf’s home, as the Tony-winning playwright of August, Osage County and Superior Donuts, but he is also an actor of considerable chops and his George is far and away the best thing in this production. Amy Morton, who played the eldest daughter in the Broadway production of Letts’ Osage County, is not the ideal physical type for Martha, but there’s no gainsaying her acting.

Mackinnon has done an excellent job of channeling Letts’ and Morton’s considerable gifts and she has also helped Madison Dirks and Carrie Coon make the most of the underwritten parts of Nick and Honey, George and Martha’s unfortunate guests.

What she is unable to do is paper over the play’s weaknesses, which are no doubt more noticeable today than they were when it debuted nearly 50 years ago. The fact that the play, which won the Tony, was denied a Pulitzer because of a few scattered instances of profanity, which a contemporary audience will hardly notice, tells a great deal about how bracing the piece must have seemed to audiences in the early sixties before the great social upheavals of later in the decade.

But despite the epic battle between George and Martha, the play, at least in this rendering, seems oddly bloodless. Perhaps we should blame the director, but I point my finger at Albee. When the monstrosities of George and Martha no longer shock us, the inconsistencies of plot and character stand out in bold relief. The echoes and borrowings from Beckett seem glaringly obvious. The once-over-lightly intellectuality, starting with the cutesy title, grate. The final revelation seems hackneyed and the nicely staged curtain lines fall flat. I was left asking myself, “Is that it?” If Virginia Woolf does not yet feel dated, the gathering dust in its crevices is noticeable.

However Arena Stage’s new home, the Mead Center for American Theater by Bing Thom Architects, is worth a visit.