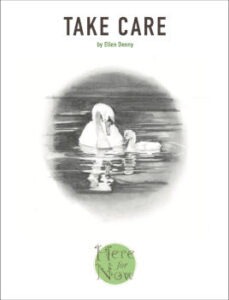 Take Care At Here For Now

Take Care by Ellen Denny, now at Here For Now Theatre, strikes me as an earnest effort to depict a woman at a crisis point in her life. But a game cast and some deft direction failed to make the piece even remotely believable for me.

Johanna (Sara-Jeanne Hosie) is a writer, an “artist” so she says, with one novel to her credit. She has put her artistic life on hold for twelve years to raise a child with her professor husband. She tells us that on their first date she told her husband-to-be that Ibsen’s A Doll’s House was her favorite play proving, she says, that men don’t listen. That in turn suggests she never expected much from marriage and that her expectations have been fulfilled.

As Take Care begins, Johanna is spending her first night in a barely furnished “writer’s house,” provided by her under-appreciated husband, so she can devote herself to writing once more. Her plans are waylaid when her husband, whom we never see, suffers a massive stroke.

Her anger over this unforeseen interruption seems to overwhelm any empathy she might feel for her husband. It doesn’t help that her daughter, Lucy (Emma Cuzzocrea), intensely annoying as only a twelve-year-old veering between incipient adulthood and childhood can be, adds even more angst to an already fraught situation.

A social worker hands her a pamphlet titled “Take Care” to help her deal with the hand she’s been dealt and encourages her to attend a support group. Johanna is loath to do so but ends up going, telling herself she is doing a writer’s research into characters. She vents her rage in the meeting and storms out in a huff

Johanna is clearly not handling any of this very well. Perhaps that’s why, while her husband languishes in rehab, she drifts into an ill-advised affair with Len (Tenaj Williams), a much younger, not to mention married, firefighter from the fire station next door.

I wanted to empathize with Johanna, but the playwright has made her so obnoxiously self-centered that I found it hard. The Doll’s House reference made it hard to believe she still loved her husband, if indeed she ever did. She clearly loves her daughter but often signals that she’d rather not.

Nor could I believe her as a writer. When she read aloud a few sentences from her work-in-progress “Mr. September,” inspired by Len, it became obvious to me that whatever writing chops she might once have possessed had deserted her. She began to look self-delusional. I couldn’t help thinking that a real writer would have immediately started exploring what was happening to her husband and how it affected the family. See also “The Year of Magical Thinking.”

Sara-Jeanne Hosie does what she can with the role, perhaps trying a bit too hard. I found her most effective when she was sitting in the background, just listening to her daughter’s monologues. But she does what the script asks her to do so I find it hard to fault her performance.

Playwright Denny does better with the daughter and Emma Cuzzocrea brings her multiple contradictions to believable life. It’s a promising performance from this highschooler. Tenaj Williams gives an easy-going reading of the underwritten and under-motivated role of Len.

Jan Alexandra Smith has added some nice directorial flourishes. I’m assuming it was her inspiration to enlist vibraphonist Max Lindsay to provide incidental music and read the occasional answering machine message. But she failed to solve what was for me the central problem with the play.

The female characters frequently speak directly to the audience, but when Johanna actively egged us on to applause, the fourth wall was irretrievably shattered for me, making it still harder to enter into the life of the characters. Set and costume designer Monique Lund has made some odd choices in Joanna’s wardrobe. She is supposed to be careless of her personal appearance, but the shredded pants she affects struck me as the choices of a much younger women. Perhaps the point was to underline her immaturity?

Take Care has a happy ending of sorts. On the eve of her much improved husband’s return to the family home, she ends her affair with Len when her daughter discovers that not only is he married but his wife is pregnant. Having it off with a married man is one thing, but doing it with a married man with a pregnant wife? I mean, a girl has to have standards. She confesses the error of her ways to both Lucy and her husband; there is a family outing to Stratford to see the swans, and we are led to believe that the future is rosy. I couldn’t buy it.

I thought of Shakespeare’s All’s Well That Ends Well and the difficulty multiple commentators have had believing Bertram’s split-second change of heart in Act Five. Could it be that Take Care is also a problem play?