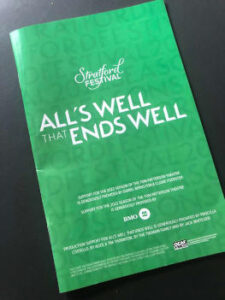 All’s Well That Ends Well At The Stratford Festival

All’s Well That Ends Well was one of two plays by William Shakespeare that inaugurated the Stratford Festival in 1953; the other was Richard III. Both are being revived to celebrate the opening of the new Tom Patterson Theatre. While I had some quibbles with Antoni Cimolino’s Richard III, and more than a few with this season’s Hamlet, I am pleased to report that Scott Wentworth’s crystal clear rendition of All’s Well is the best of the three Shakespeares being offered this season.

The central plot of All’s Well, lifted straight from The Decameron, involves Helen (Jessica B. Hill) a low-born physician’s daughter who has inherited her father’s miracle cures, and Bertram (Jordin Hall), the headstrong and misguided Count of Rossillion. When Helen cures the dying king of France (Ben Carlson) she requests as her reward Bertram’s hand in marriage. The king readily assents but Bertram will have none of it. Although he goes through with the marriage, in defiance of the king he refuses to consummate it. He runs off to the wars in Florence, but not before leaving Helen with a seemingly impossible challenge. If she can get a family heirloom ring from his finger and produce a child of his loins, then and only then will he recognize her as his wife.

In Florence, Bertram becomes besotted with Diana (Allison Edwards-Crewe), a local maiden, and tries to bed her. Helen, meanwhile has become a pilgrim, faked her death, and gone to Florence in pursuit of Bertram. There she hatches a plot with Diana that not only gets the ring off Bertram’s finger but allows her to have sex with him in Diana’s stead, a ploy sometimes referred to as “the bed trick.”

All this is unravelled in a complex and confusing scene in Act V. Bertram, confronted with his perfidy and the knowledge that Helen has well and truly bamboozled him, has an instantaneous change of heart and avows a deep and abiding love for his wife. It’s a moment that has confounded generations of directors, not to mention the difficulties it poses to Method actors!

Shakespeare fleshes out this tale with some wonderful characters not found in Boccacio’s original. Parolles (Rylan Wilkie), a vain and cowardly braggart soldier and boon companion to Bertram, functions as something of a Falstaff figure who helps explain, in the eyes of some commentators, why Bertram is such a jerk. Lavatch (André Sills), identified in the programme as “the sexton,” is in Shakespeare’s script the Fool of Bertram’s deceased father and now a loyal retainer to his widowed mother, the Countess of Rossillion (Seana McKenna). Lafew (Wayne Best) is a lord who sees Parolles as the scoundrel he is, but offers him a shot at redemption after he’s been cast off by others.

All’s Well is one of Shakespeare’s so-called “problem plays.” The term is poorly defined and its meaning malleable depending on who’s using it. The consensus is that the “problem” is the moral conundrum posed by Bertram’s baffling behavior and his almost miraculous change of heart, not to mention Helen’s bed trick. I tend to think that the real problem is that directors have a dickens of a time figuring out how to stage the bloody thing. (That may be why, according to one ranking, All’s Well is only Shakespeare’s 28th most produced play.)

Director Wentworth has chosen to play it straight, allowing the problematic chips to fall where they may. It proves to be an effective strategy thanks in no small part to the Festival’s stable of experienced classical actors who can make even the most convoluted Elizabethan texts sound contemporary. (There is speculation that fairly large chunks of the play were written by Thomas Middleton. Having read the script with middling success, I would agree.)

In Wentworth’s reading of the play, the “problems” are far less troubling than they are to some scholars and audiences. There is a scholarly thread, and one to which I subscribe, that All’s Well owes more to medieval storytelling genres than it does to the more psychologically acute dramas that were emerging in the Elizabethan age.

Shakespeare’s audience would have recognized the plot of All’s Well as an oldie but goodie – a standard, formulaic tale of someone refusing to do what he was supposed to do, suffering for that decision, and then “finding religion” as it were, thus restoring the natural order of things. They would have unquestioningly accepted Bertram’s change of heart in much the same way that modern audiences accept the fact that the crew of the Starship Enterprise can breathe the atmosphere of any planet on which they land.

Ironically perhaps, in an age in which new genders pop up like wildflowers and #polyamorous is trending, Helen’s bed trick, which scandalized audiences a few generations back, barely raises an eyebrow for most folks these days. The fact that Shakespeare presents a woman choosing a reluctant mate and bending him to her will seems perfectly in tune with the times.

As I’ve said, the cast is uniformly excellent. Everyone can handle the verse and can make the most archaic turns of phrase perfectly understandable without resorting to clumsy indicating. Rather than present a list of everyone, I will simply point to a few performances I found especially noteworthy.

Jessica B. Hill’s Helen, along with her turn as Lady Anne in Richard III, cements her claim to becoming one of the Festival’s most reliable leading ladies. André Sills is terrific as Lavatch, although I wondered if some in the audience puzzled over his position in the Countess’s household. His costume says “gardener” more than either “sexton” or “fool.”

Best of all is Rylan Wilkie as Parolles, his most prominent role in the seven seasons he has spent at the Festival. Under Wentworth’s direction, he makes the most of the opportunity and is clearly an audience favorite.

Much of All’s Well takes place in war-torn Florence and Wentworth has found inventive ways of helping us remember that, including some truly arresting tableaux vivantes. On the other hand, set and costume designer Michelle Bohn has dressed most of the soldiers as World War I doughboys, but every officer seems to have stepped out of a different Victor Herbert operetta, their colorful uniforms suggesting that each belongs to a different army.

Despite a few odd choices like this, Wentworth’s All’s Well is as sturdy a production of this often puzzling play as Stratford is likely to see for a good long while.