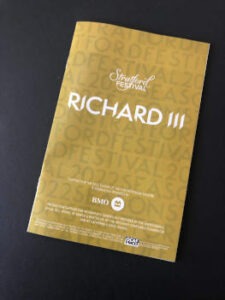 Richard III At The Stratford Festival

Richard III can wait. Let us now praise theatre architecture. The Stratford Festival’s new Tom Patterson Theatre is an unalloyed triumph. It’s as if the stage of the old Tom Pat died and went to heaven. The acoustics are superb, the seats are comfy, the upgrades are first-rate (real traps!), and it’s all wrapped in a bright and sunny curtain of stone and glass. Those who’ve been seeing shows in this venue for years will feel right at home. Kudos to architect Siamak Hariri and all the donors who made it possible.

It is fitting that this splendid new performance space is being inaugurated with Shakespeare’s Richard III, directed by Festival Artistic Director Antoni Cimolino. After all, Richard III inaugurated the Stratford Shakespearean Festival (as it was then called) in 1953, directed by then artistic director Tyrone Guthrie. That production starred Alec Guinness as the “poisonous bunch-backed toad.” So it is also fitting that the current production stars Colm Feore, who after the death of Christopher Plummer has assumed the mantle of Canada’s greatest living classical actor. (As a side note, Feore appears in Chicago! Not in this season’s smash hit, but in the 2002 film version.)

Together, Feore and Cimolino have given us as straightforward and crystal clear a Richard III as you could hope for, although the genealogically challenged (and I count myself among them) will want to study the synopsis and family tree provided in the program.

Feore, in a smashing costume by Francesca Callow that traces the scoliosis of his spine in knotted black leather, may be twisted and bent, but he outlines the trajectory of his bloody ascent to the throne with geometric precision. He narrates his own machinations and scampers nimbly, almost gleefully about as he carries out his plans and gloats at every triumph. He can smile and smile and yet be a villain, as Hamlet would have it, as he lures one person after another into his plot. He can be at once utterly vile and almost likable, a trick that Feore pulls off deftly.

Once he ceases to be Richard, Duke of York, and becomes Richard III, the mood changes. He has reached the pinnacle of power and has become the quintessence of evil. Once again, Feore handles the transition brilliantly.

I guess one of the perks of being Artistic Director is that you get your pick of the best talent the Festival can afford so it’s perhaps not too surprising that this Richard III features some of the Festival’s finest.

Michael Blake as Clarence, Ben Carlson as Hastings, Wayne Best as the dying Edward, André Sills as Buckingham, and David Collins as Stanley are all excellent. I was puzzled at first by Hastings’ lamed arm, concealed under his costume, since there is no mention of the injury in the text; I learned that Carlson has broken his clavicle and a decision was made to incorporate the damaged limb into his characterization. Brilliant!

Good as the men are I was especially impressed by the women in the supporting cast. Seana McKenna, who played Richard III herself in 2011, turns in a tour de force performance as “mad” Queen Margaret, cold as ice and dripping venom. Lucy Peacock as Queen Elizabeth is by turns imperious, bereft, piteous, and Machiavellian.

I was especially taken by Jessica B. Hill’s Lady Anne, one of the best I can remember seeing. Now in her seventh season with the Festival, she is coming into her own as a fine Shakespearean actor. She shows every promise of becoming a worthy successor to Peacock and McKenna. Let’s hope the Festival continues to nurture her growth as an artist.

Given the fact that repertory companies these days have achieved gender parity or close to it, it is inevitable that in a male-heavy play like Richard III some women will have to be cast in males roles. Cimolino has chosen wisely to tap Hilary McCormack as the murderous Tyrell. This is only her second season with the Festival and her first actual role. It’s a compelling introduction to an actor of real promise.

Cimolino uses an intriguing framing device for the play. At the beginning we see a recreation of the archaeological excavations in present-day Leicester that uncovered Richard III’s final resting place under a car park. We witness the moment when his bones are uncovered. As archaeologists and a curious crowd gather round, Richard III himself emerges from the pit and the play begins. It’s a strikingly theatrical moment.

Less successful is the play’s end, when the victorious Richmond (an oddly bland Jamie Mac) changes into modern dress and, at a podium with a microphone, in front of news videographers, delivers the final speech, shared in this version with his wife Elizabeth. Is Cimolino suggesting that present day England has been struggling through a time of turmoil? That it needs to reconcile to itself? This was unclear.

I had my quibbles with some other directorial choices, but they pale before my admiration for Colm Feore’s glowing central performance, the production’s intelligent reading of the script, the verbal dexterity of an accomplished cast that makes every word and every emotion crystal clear, and the splendid rebirth of a beloved Festival venue that we lost for a time but that has been restored to us in a glorious new incarnation.