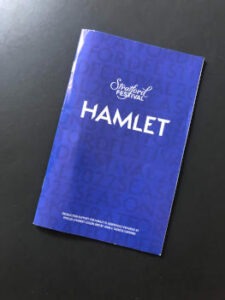 Hamlet at The Stratford Festival

At last! A fardle-free Hamlet! ’Tis a consummation devoutly to be wished.

The director, Peter Pasyk, has given the Stratford Festival a wild and wildly erratic, not to mention much anticipated Hamlet, with visually striking moments producing gasps alternating with ludicrous ones that produce laughter when stunned silence should be the more appropriate response. Some moments, like the opening encounters with the Ghost are arresting; some, like the duel between Hamlet and Laertes, are pro forma and dull; others, like Ophelia’s mad scene, are just plain embarrassing.

Pasyk has set the play in the present, in a Denmark that is not only rotten but a security-obsessed surveillance state. Palace lackeys Reynaldo (John Kirkpatrick), Marcellus (Tyrone Savage), Barnardo (Kevin Kruchkywich), and Francisco (Josue Laboucane) relay messages by talking into their wrists or lapels, like Secret Service agents. Cell phones are used not just to communicate but to eavesdrop and provide video records of events. Ophelia is made to wear a wire to get the goods on Hamlet. Klaxons blare and searchlights rake the stage and auditorium in moments of crisis. It’s a clever idea, and credit is due to the lighting of Kimberly Purtell and the music and sound design of Richard Feren for making it work so well, although why the sound of gunfire in the Queen’s boudoir doesn’t elicit an immediate response from Claudius’ hyper-vigilent security apparatus must remain a mystery.

Pasyk has also played fast and loose with the text. His Director’s Notes tell us he has drawn from all three extant versions, including the First Quarto, which many scholars have labeled a pirated version cobbled together from the unreliable memories of actors. At least he didn’t include the deathless line “Why, what a dunghill idiot slave am I.” He even borrows a snippet from Jacques’ “Ages of Man” speech from As You Like It.

He has slashed the text relentlessly, which is not altogether a bad thing, since it allows for some extended bits of stage business while still bringing the play in at a tidy three hours, almost precisely on the dot. Aficionados of the play will notice that the “to be or not to be” soliloquy is missing the aforementioned “fardles,” not to mention the “proud man’s contumely.” Horatio’s part is cut to the bone, a real loss in my estimation. Lost, too, is the moment when Hamlet asks the Player King to add a speech of his own devising into the evening’s entertainment. And he has dispensed with Fortinbras altogether. That leaves a modern Canadian audience, which is at this very moment pondering the inevitable ascension of Prince Charles to the throne of England, puzzling over why Claudius became king on Hamlet’s father’s death. The loss of the coda in which Fortinbras arrives from Norway to provide a sense of stability and continuity after the whole royal family has been slaughtered struck me as particularly unfortunate. And those were just the excisions I, no deep scholar of the text, noticed.

Pasyk has also made some puzzling additions to this Hamlet. Bizarrely, he has Claudius confess his crime to Polonius, who listens in stunned silence and then tells the king to fall on his knees (not in any script with which I am familiar) before stalking out. It’s an interpolation that has no payoff. He has Ophelia, in a shadowy upper alcove, discover her father’s corpse and perform what looks for all the world like an impression of Edvard Munch’s “The Scream.” The moment is at once risible and strangely effective.

The elders, Claudius (Graham Abbey), Gertrude (Maev Beatty), and Polonius (Michael Spencer-Davis) seem to be in a more traditional production and give far more traditional interpretations of their characters. Abbey is particularly effective.

Ophelia excepted, the younger generation, all students at far-off elite institutions, have been conceived by Pasyk and costume designer Michelle Bohn as the kind of wealthy, upper-crust kids who dress and act like rap star wannabes. Polonius’ sartorial advice clearly falls on Laertes’ (Austin Eckert) deaf ear and the outfits of Rosencranz and Guildenstern are ludicrous. Believing that the Putin-like Claudius would entrust his dirty work to these clowns requires more suspension of disbelief than I was able to muster.

The elaborate and elaborated hip hop rituals they execute when greeting each other may have puzzled oldsters like me, but the younger people in the audience seemed to get it immediately.

On the plus side (and by now you might be wondering if I felt there was a plus side), Pasyk has retained the spine of the play, focusing it intently on Hamlet’s emotional journey. He has stripped out a fair amount of unfamiliar vocabulary, making it more accessible to a modern audience. This is a hyper-kinetic hip hop Hamlet with an energy typically associated with pop-culture shoot-em-up flicks.

Which brings me to the aspect of this production that has drawn the most media attention — the “historic” casting of Amaka Umeh in the title role. She is the first woman and the first black person to play the role at Stratford. She identifies with other ethnic, geographic, and sexual categories as well, which if you are curious you can explore here.

Of course, none of this stuff should make a whit of difference although, alas, in our times it does. The crucial question is “Can she cut the mustard?” Colm Feore, a Stratford Hamlet himself and this season’s Richard III, said of playing Hamlet, “If you say most of the lines in the order in which they come and remain standing until you’re supposed to fall down, it will be called an interpretation.”* By that standard, Umeh’s Hamlet more than qualifies.

Pasyk has done his star a favor by trimming many of Hamlet’s lines since Umeh takes her time with the famous set pieces, breaking … them … down into discrete … sections …. EMPHASIZING important words … and gesturing emphatically. At moments, when Umeh was at the height of her anger, she seemed to be channeling Chris Rock as she strode, feline-like around the stage, spitting out invective. And certainly no one can accuse her of lacking energy or not giving it everything she has.

Truth be told, she doesn’t always speak the speech trippingly on the tongue. Indeed, she mouths a good bit of the text, and she quite frequently saws the air with her hands. She is blessed with long, expressive fingers which frequently curl into Nosferatu-like talons when she is roused. In the very torrent, tempest, and whirlwind of her passions she doesn’t really beget much temperance. She mugs, points, over-emphasizes words, and illustrates the lines, for example pulling her mouth open with a hooked finger when the joke is about catching a fish. All of this lends Hamlet’s instructions to the players an amusing touch of irony.

And yet, if you are willing to take her performance on its own terms, there is much about her over-the-top style that works remarkably well. Seldom has there been a Hamlet whose disposition has been more antic. This Hamlet’s insolence to his elders can be breathtaking and the prince’s treatment of Ophelia would make Johnny Depp blush. It’s no wonder they all think Hamlet has gone mad.

To use Feore’s measuring stick, this is most definitely “an interpretation” and a compelling one. I last saw Ms. Umeh in Norm Foster’s comedy, Hilda’s Yard, in 2019; her Hamlet represents a quantum leap forward.

So what’s going on here? I think we may be witnessing in this production a passing of a Shakespearean torch. Much as Kenneth Branagh’s Henry V reduced Laurence Olivier’s to the status of a hammy period piece, Umeh’s performance speaks to a new generation. Hers may not be a Hamlet for the millennium, but is is clearly a Hamlet for millennials and the Generations Z and Alpha that are following close upon.

It will be interesting to see how this production fares in the public square. My guess is that many in the media and theatergoing public will embrace it with relish since it is very much of the moment and liberties with the text be damned. Young people new to The Bard will no doubt find it “pretty cool” (or whatever the current locution is) and they’ll never miss the discarded chunks of the play. Of course, traditionalists (are there any of us left?) will gripe and grumble.

The sparse audience with whom I saw it (25% max of capacity at my estimate) gave it a standing ovation, which is probably not saying all that much. These days it seems you can throw a ham sandwich into the middle of a stage, shine a spotlight on it, and get a similar response.

For the Festival’s sake, let’s hope word of mouth will start to fill those empty seats. I would encourage antediluvian curmudgeons who, like me, are philosophically opposed to this sort of gender-bending casting to see this production. You may not like it, but it will give you much to ponder.