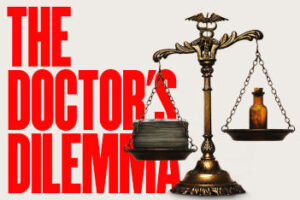 The Doctor’s Dilemma at the Shaw Festival

There’s a bit of bait and switch going on at the Shaw Festival. Since I’d never seen George Bernard Shaw’s The Doctor’s Dilemma, I looked forward to the Shaw’s production, helmed by Diana Donnelly. I still haven’t seen George Bernard Shaw’s The Doctor’s Dilemma, which is not to say that what I did see wasn’t fascinating and utterly involving, it just wasn’t as advertised.

Of course, when at the top of the show Alexis Gordon steps through the curtain in a smashing red outfit and lip syncs William Shatner’s wryly amusing mediation on death, “You’ll Have Time,” you have been put on notice that what you are about to see is not going to be your grandfather’s G. B. Shaw. (Oddly enough, Shatner wasn’t credited in the programme.)

Even so, better billing would have it as “The Doctor’s Dilemma, a new play by Diana Donnelly [I’m guessing here since no credit was given for adaptation], inspired by a play by George Bernard Shaw.” I have no philosophical quibbles with mucking about with source material. Shakespeare did it all the time and Shaw is in the public domain, so he’s fair game. But, says this avid theatergoer who hears time’s winged chariot getting ever closer, shouldn’t there be a place to see “classic” plays presented pretty much as their authors intended? And in the case of Shaw, where better to see them than a place called “The Shaw Festival”?

Now that I have that out of my system, I will turn my attention to Donnelly’s intriguing riff on Shaw’s original. There’s the usual tinkering you’d expect in adaptations of this kind. The time becomes the present, the location Canada; knighthoods become Nobel prizes, medical conditions get updated, men become women, a Jewish character is omitted entirely (to avoid accusations of stereotyping?), and another gets pregnant.

Fortunately, for all the diabolical liberties taken, this version of The Doctor’s Dilemma remains true to the spirit of Shaw, who had, shall we say, a jaundiced view of the medical profession. Donnelly has sprinkled the production with any number of clever directorial conceits that have a bracing, distancing effect that always focuses our attention on the social critique of the piece.

The central dilemma facing Dr. Colenso Ridgeon, whose “new” cure for multidrug-resistant TB is in limited supply, is whether he should save the life of Louis Dubedat, a brilliant artist and utterly amoral scoundrel, or that of Dr. Blenkinsop, an old friend, an honest man, and a dedicated physician who has ministered selflessly to the less fortunate. Who deserves to live and who to die? The corollary question is whether our knowledge of an artist’s moral flaws should have any bearing on our understanding and appreciation of the work, a topic with which contemporary “cancel culture” is actively engaged. Both these questions get an exhilarating workout in Donnelly’s take on The Doctor’s Dilemma.

Following Shaw’s lead, Donnelly has great fun with the posturings and pretensions of the medicos in the play. The surgeon Dr. Cutler Walpole (Allan Louis, the wonderful Caesar of Gem of the Ocean) diagnoses every malady as a simple case of blood poisoning, easily cured by the removal of the “nuciform sac.” Fellow Nobelist Dr. Ralph Bloomfield Bonington, or B.B., (the marvelously droll and voluble David Adams) has decided that the key to every cure is “stimulating the phagocytes” so they’ll consume the germs. Donnelly has conceived these two as Dr. Oz-like celebrities who embody their own brands of medical quackery and costume designer Rachel Forbes has dressed them accordingly in hilariously over-the-top fashion.

Dr. Ridgeon (the nicely centered Sanjay Talwar), who dresses more conventionally, has made his own contribution to medical science, one that has just won him the Nobel. He “butters” germs with “opsonin,” making them irresistible to the phagocytes. The voice of reason, such as it is, is provided by Dr. Patricia Cullen (a smashing Sharry Flett), supposedly many years Ridgeon’s senior. She is less flamboyantly dressed than Walpole and B.B., but I’m guessing many women of a certain age in the audience were wondering where they could find knockoffs of her stunning Rachel Forbes originals.

The most sympathetic doctor of the lot is the impecunious Blenkinsop (Jason Cadieux giving a superb performance in a small role), who as it happens also has TB. Whereas the other doctors see medicine as “a conspiracy against ordinary people,” for Blenkinsop it is a calling. He represents the ideal of health care for the general welfare (how Canadian!), while the others see it as a business for profit, the more obscene the better.

Central to the plot are Jennifer and Louis Dubedat. When Jennifer comes to plead for her husband’s life the overbooked, can’t-take-on-a-single-new-patient Dr. Ridgeon falls instantly in love with her. The casting of Alexis Gordon as Jennifer makes this hokey plot device utterly believable. He agrees to take Louis on, even though it means condemning another patient in his drug trial to death, and he invites Louis to dinner to meet his colleagues.

At the dinner, Walpole and B.B. become as infatuated with Jennifer as Ridgeon. But Louis (a marvelously manic and charismatic Johnathan Sousa) is revealed to be a thorough rapscallion and grifter, not to mention a bigamist, who borrows and steals from all of the doctors at the dinner, including the down-on-his-luck Blenkinsop.

When Ridgeon learns what a scum Louis really is, he decides that Louis deserves to die and Blenkinsop to live, but his infatuation with Jennifer causes him to protect her from the knowledge of her bigamous husband’s iniquities (although it seems that she knows about many of them and doesn’t much care).

A visit by all the doctors to Louis’ seemingly subterranean studio in Act Three allows the artist an opportunity to plead his case for his cheerful amorality by declaring himself a disciple of Bernard Shaw. That’s not an interpolation by Donnelly; it’s Shaw being meta long before the term was invented and it’s tremendously entertaining.

The walls of Dudedat’s studio are covered with stenciled artwork, a large depiction of the grim reaper, and much graffiti, including a prominent quote from David Wojnarowicz: “The silence of Marcel Duchamp is overrated.”

I’m not sure what we are to make of all this. In Shaw’s The Doctor’s Dilemma and in Donnelly’s version as well Louis is presented as a realist, primarily a portraitist, whose work (we never actually see any of it) conveys deep insight into his subjects. Shaw doesn’t give too many hints as to what Dubedat’s work actually looks like, although Louis cites Michelangelo, Velasquez, and Rembrandt as his ideals. What we do know is that the posh, well-heeled doctors in the play, with their presumably mainstream tastes, are instantly smitten with his work and willing to offer serious money for it.

David Wojnarowicz, on the other hand, was an outspoken gay activist and an important figure in the Neo-expressionist art scene in New York’s East Village in the 1970s and 1980s. His art, to quote artsy.net, concerned itself with “cruising, traffic, water, suicides, flesh, clouds, dilapidated walls, skeletons, transvestites, government, riverboats, hate, sex, gore, thieves, lovers, artists, and junkies.” Wojnarowicz died of AIDS at the too-young age of 37, so perhaps Donnelly saw him as a fitting avatar for the TB-ravaged Louis. Or maybe the studio set is simply to let us know that Louis is one of those crazy artists.

The arguments of the play are complex and intricately argued (hey, it’s Shaw!) and are well worth the effort required to engage them and discuss them afterwards. It may be helpful to note that Niagara-on-the-Lake has bars that stay open late and have finely aged single-malt Scotch on offer.

The intellectual riches of the play aside, the great joy of this production is the cast Donnelly has assembled and allowed to shine. They are all first rate, some of them giving the best performances I’ve had the pleasure of seeing them deliver.

Many of those directorial touches work extremely well. Others . . . well, if anyone understands the concept behind the production’s final moment, feel free to enlighten me in the comments. I haven’t a clue.