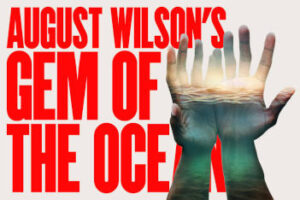 Gem Of The Ocean at the Shaw Festival

August Wilson’s Gem of the Ocean, the first installment in his ten-play “Century Cycle” (although the ninth to be written), is receiving a powerful, even explosive production in the intimate confines of the Shaw Festival’s Jackie Maxwell Studio Theatre under the taut direction of Philip Akin.

The Century Cycle tells of the African American experience throughout the twentieth century, one play for each decade. The cycle’s overarching theme — the need for Black Americans to internalize and honor the brutal history of slavery and its legacy — receives its most explicit treatment in Gem of the Ocean.

The year is 1904, 41 years after the Emancipation Proclamation. Slavery is still a living memory for many of the characters in the play. Blacks are free now but that liberation is bittersweet. “What good is freedom if you can’t do nothing with it?” asks one character.

The scene is Aunt Ester Tyler’s house in Pittsburgh’s Hill District, the location of every play in the cycle but one. The address is 1839 Wylie Avenue. Coincidentally (or perhaps not), the year 1839 marked the Amistad rebellion, one of history’s most storied slave revolts.

Aunt Ester shares her home with Eli, called her “gatekeeper” in the script, and Black Mary, a young woman who serves as housekeeper. Frequent visitors include Solly Two Kings, an escaped slave and conductor on the underground railroad, and Caesar, brother to Black Mary and a local law enforcement figure who has gained a certain level of financial and social status by serving the interests of the White power structure over those of his own people. (Forgive me for thinking of Clarence Thomas.)

Wilson likened his plays to “stews” into which he tossed disparate elements and stirred them together. The result in Gem of the Ocean is a rich blend of vivid characters, each of whom comes to the fore in Wilson’s evocative language. They tell stories that honor the vernacular while rising to the height of poetry.

Solly tells of escaping from Alabama in 1857 and making it all the way to Canada, where he encounters people “white as cotton. Got smiles on their faces. Shake your hand and say ‘Welcome.’” The moment drew an appreciative murmur from this Canadian audience. But freedom didn’t feel right while others were still enslaved, so he returned to lead others out of bondage.

Solly’s work continues as he prepares, armed only with a solid staff, to return to rescue his sister in Alabama. The Black people there still lived in conditions barely removed from slavery. The Whites, who don’t want to lose their source of cheap labor, prevent them from leaving the state and shoot those who try.

We learn that Aunt Ester is 285 years old, which makes her as old as the history of American slavery itself. Needless to say, she has a reputation in the neighborhood for having supernatural powers. Or could it be that Aunt Ester is the latest in a long line of African priestesses (a role that becomes manifest in Act Two) and thus embodies the accumulated wisdom of the strong Black women who preceded her?

It is her reputation that brings young Citizen Barlow, a recent escapee from Alabama, to her doorstep. Wracked with guilt for having caused the death of a man accused of a petty theft he himself has committed, he seeks to have his soul washed by Aunt Ester’s powers.

The powerful centerpiece of Gem of the Ocean is a hallucinatory, otherworldly ritual in which Citizen is conducted to the City of Bones, an undersea metropolis built from the bones of Africans who died during the Middle Passage. Ester places in his hands a folded paper boat representing the slave ship Gem of the Ocean. Aided by Black Mary, Solly, and Eli, she leads Citizen on a nightmarish journey in which he confesses his guilt, relives the horrors of slavery, and seems to be symbolically killed and reborn.

Thanks not just to the cast but to the wizardry of lighting designer Kevin Lamotte, the music and sound design of Miquelon Rodriguez, and a bit of magic conjured by set designer Camellia Koo on the Studio’s tiny playing area, the ritual is electrifying.

Director Akin has marshaled an impressive cast and drawn powerful performances from each of his actors. Monica Parks is regal as Aunt Ester, David Alan Anderson is mesmerizing as Solly, and Allan Louis is downright scary as Caesar. The young Nathanael Judah is especially impressive as Citizen; a confused innocent at first, at play’s end he takes up Solly’s fallen staff to lead more of his people out of Alabama. As Black Mary, Sophia Walker gives a restrained and understated performance until we come to realize that she is destined to become Aunt Ester’s successor. Ironically, several of these actors also appear to good effect in Just To Get Married, an example of the “color blind casting” that August Wilson railed against.

Gem of the Ocean is a superlative production and yet another must-see at Shaw this year. Along with Too True To Be Good, Everybody, and Just To Get Married, this is shaping up to be an exceptionally fine season.

Footnote: I couldn’t help but notice the scarcity of Black faces in the audience, barely a dozen. Clearly, the audience development department at Shaw has work to do.