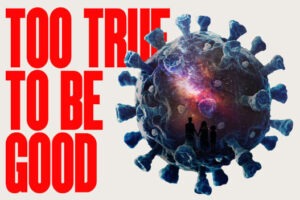 Too True To Be Good

It has become conventional wisdom to dismiss George Bernard Shaw’s Too True To Be Good, which is receiving a sprightly revival in the intimate confines of the Shaw Festival’s Jackie Maxwell Theatre, as late and lesser Shaw. After he wrote Saint Joan, some critics noted a “break with reality” and “technical disintegration.” The play is certainly late Shaw; it was first produced in 1932, the year the playwright turned 76. But is it lesser? I’m not so sure.

The current Shaw revival (there have been five altogether) is nimbly directed by Sanjay Talwar and makes a case for assigning Too True To Be Good to a place of pride in the Shaw canon. Mr. Talwar, by the way, is an actor who has distinguished himself in a variety of roles at both the Shaw Festival and the Stratford Festival. I gather this production marks his directorial debut at Shaw.

Instead of a “break with reality,” I see an embrace of modernism. At the time Shaw was composing Too True To Be Good, the shock waves of Joyce’s Ulysses were still washing over literary Europe, Pirandello’s Six Characters was nearly a decade old, the Dada movement had only recently waned. Where some see “technical disintegration,” I see a new-found freedom of form, one that continued to be embraced by playwrights such as Thornton Wilder, Samuel Beckett, and the Absurdists.

Too True To Be Good may not be on the same level as some of the masterpieces I’ve just mentioned, but it definitely seems to show Shaw moving into a new phase in his career, shedding the confines of well elaborated plots and tidy resolutions in Act III in exchange for the freedom to do what he had always done best — pontificate. In a Hollywood pitch meeting Too True To Be Good might be positioned as Theatre of the Absurd meets Plato’s Dialogues.

Too True To Be Good opens in a sickroom where a young woman (Donna Soares) moans in pain while her mother (Jenny L. Wright) becomes hysterical. The first words are spoken by The Microbe (a puckish Travis Seetoo) who shares the sick woman’s bed. He complains that he is being blamed by the doctors for her illness when, in fact, it is she who has infected him. Could this be where the “break with reality” slur originated?

Shaw had some odd, Dr. Oz-like notions about health and the medical profession and he used this scene to air some of them, although the joke about vaccinations, which gets a big laugh, is a modern interpolation. (What happened to reverence for the text?)

If the talking microbe (called “The Monster” in Shaw’s script) wasn’t enough, the plot continues to strain our willful suspension of disbelief when a burglar (Graeme Somerville), who also happens to be an ordained minister of the Church of England, enters intent on robbing the sick daughter with the assistance of his partner in crime (the ever bewitching Marla McLean), who is posing as a Nurse attending the sick girl.

The plot becomes even more improbable when the burglar convinces the sick girl, who it turns out is quite the martial artist when aroused, to join them in an absurd plot to steal her own pearls, fence them, and abscond to a life of luxury.

There are references to, or echoes of other Shaw plays throughout Too True To Be Good. Shaw scholars may spot them, but even if you faked your way through your college course on modern drama (as did I), your blissful ignorance should be no bar to your enjoyment of the play.

In a very amusing Shavian touch, the first act ends with the Microbe telling us, “The play is now virtually over; but the characters will discuss it at great length for two acts more. The exit doors are all in order.” I’m not sure, but I do believe a few audience members took the hint.

I won’t attempt to summarize the rest of the plot, which takes place on a distant shore and, as promised by the Microbe, consists of a great deal of philosophical discussion. I will however call attention to the players who have yet to appear since their pitch-perfect performances deserve praise and, along with those already mentioned, are largely responsible for making Too True To Be Good worth the three hours (with two intermissions) you will have to devote to it.

Neil Barclay is a British Army colonel more interested in collecting rank and medals than actually commanding, while Jonathan Tan, in a role said to be modeled after Shaw’s friend Lawrence of Arabia, is a private more interested in getting things done than rising in the ranks; when promotion looms, he simply reenlists under an assumed name. Barclay makes the colonel every inch the buffoon Shaw intended and Tan turns in another impeccable performance. Martin Happer is stalwart as a bible-reading soldier who resists the irresistible overtures of Marla McLean until he doesn’t. Finally, the excellent Patrick Galligan appears as the father of the burgling preacher, looking very much like Shaw himself (which I gather is a traditional choice for the character) to decry “the supreme tragedy of the atheist who has lost his faith — his faith in atheism.” If I was forced to pick a favourite it would be Graeme Somerville who is blessed with a beautiful voice and the vocal technique to deploy it to best advantage in Shaw’s extended, some might say interminable, speeches.

In past seasons, I noticed that the Festival tended to present Shaw with Canadian accents. Here, the director has wisely chosen to deploy the appropriate English accents to better delineate the class distinctions that are so important to the points Shaw wishes to make. And the cast is up to the task.

Kudos, too, to costume designer Joyce Padua, who has provided not one but two beguiling costumes for the Microbe. I only wish the director had found a better way to effect the scene changes between acts instead of having cast members come on as sort of wiggling microbe-ettes to shift things about. Of course, audience members cross portions of the small playing area of the Jackie Maxwell during intermissions so perhaps there was no alternative.

So what is Too True To Be Good about? I will dodge that question except to quote a favourite line from an extremely obscure backstage comedy: “the play has many themes.” These include the vagaries of medical science, the misery of the wealthy classes (yes, you read that right), the failures of religion, the absurdities of the military, finding meaning in a meaningless universe, how government can best be organized to serve everyone, including those running the show, the alienation of most people from modern society and the roles into which it forces them, a sort of proto-feminism, the appalling lack of self-knowledge (“the horror of the naked mind is still more than we can bear”), and no doubt a few more that my aging brain did not retain. The fact that so many of the topics touched on in Too True To Be Good have an eerie resonance with our present social and political situations is yet another justification for this revival.

If you and your theatregoing companions pay close attention you will have plenty to discuss over drinks at the nearest watering hole. If you are moved to delve more deeply into the play, the script is available free online. It’s worth the download if only for Shaw’s lengthy preface. If you’d like to add the play to your library, a very nice printed version that includes the preface is available in the Festival Theatre’s shop for just $14.95.