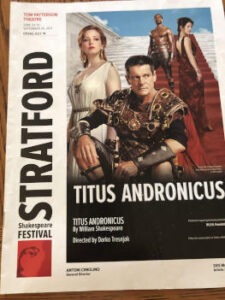 Still, the rendition the play is being given at the Stratford Shakespeare Festival’s Tom Patterson Theater this season will convince many that play should be returned to the shelf more or less permanently.

This is not to say that the production is bad. Indeed, this is a fairly straight-from-the-shoulder reading that lets the play speak for itself. The director, Darko Tresnjak, uses the long narrow stage of the Patterson to good effect and his staging of the visit of Revenge, Murder, and Rapine to the “mad” Andronicus is terrific. He mutes some of the gorier moments with well-timed blackouts, but there’s still more than enough blood and violence to prompt one theatergoer I overheard to declare, “This is my last Titus.”

This is a “revenge tragedy,” created some say in response to the popularity of Thomas Kyd’s Spanish Tragedy for a rival theater company. As such it’s a pretty paint-by-the-numbers affair. One act of random cruelty begets a series of hideous revenges by the Goth queen Tamora against the Andronicus family, followed by an even more hideous spate of tit-for-tat by Andronicus and company.

Of course this is Shakespeare and the bloodletting is interspersed with cleverly rude comedy and a few attempts at lyricism that fall flat in the context but give hints of the glories to come in the playwright’s later career.

The cast is, by and large, a good one, with John Vickery a sterling Titus and Dion Johnstone a mesmerizingly evil Aaron. Clair Lautier also scores as Tamora.

There is probably no “ideal” way to stage Titus but this production comes close. I just wish Tresnjak hadn’t bobbled the ending with an unnecessary modernist conceit.